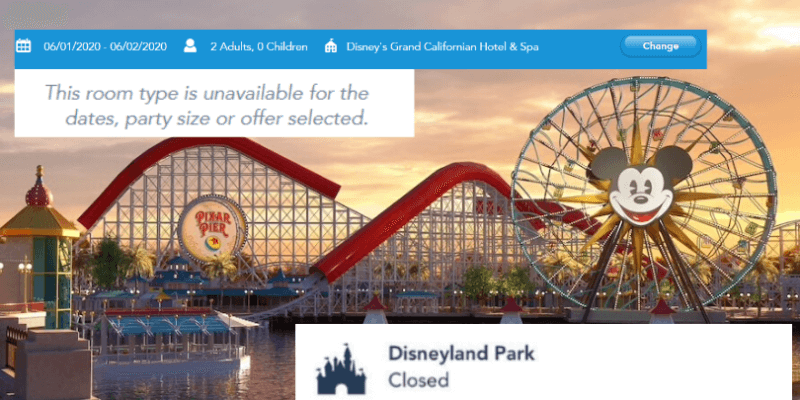 With the Disney parks being temporarily closed “until further notice”, we may have a new estimated guess on when Disneyland Resort in California may reopen to guests.

We previously reported that according to the official Disneyland website, if you try to book a resort reservation for any date prior to June 1, it says there are no rooms available.

Inside the Magic now has just tried booking a Disney resort reservation for dates prior to July 1 and not a single Disneyland Resort hotel has availability.

As you can see, not even a premium view at Disney’s Grand Californian Hotel & Spa — one of the most luxurious rooms on Disneyland Resort property — is available to be booked! See the screenshot below.

Disneyland’s official website was last updated on April 16, 2020 and still reads that the “Disneyland Resort theme parks, hotels, and the Downtown Disney District are currently closed and a reopening date has not been identified.”

On the other hand, it looks as though you can still book Disney resort reservations for Walt Disney World beginning on June 1, 2020, as previously reported.

Inside the Magic has reported prior that Disney announced a huge vacation offer — a free Disney Dining Plan — to those guests whose vacations were unfortunately impacted by temporary theme park closures. This offer is included in the emails that guests receive once their resort reservation has been canceled due to the park closures.

At this point, the Disney Parks have not yet made an official announcement as to when the Disney World Resort or Disneyland Resort will reopen to guests, however, this is what we found when searching both official websites for the Disney park.

On the other hand, Shanghai Disneyland recently announced they will be reopening to guests beginning on May 11, 2020 with limited capacity. Shanghai Disneyland’s normal capacity is 80,000 people but the government stated in order to reopen they must keep it at 30% capacity — approximately 24,000 guests. However, the Disney officials have stated their strategy of opening up far below the 30% capacity with gradually open up to 24,000 a day.

Other protocols that have been discussed are temperature checks as well as face masks, which Shanghai Disneyland confirmed that the Shanghai Disney Resort will provide masks for guests and employees. The only employees without masks are face characters who will be kept at a safe distance from the guests.

Dr. Pamela Hymel, Disney’s Chief Medical Officer, also recently shared that Disney is currently looking into maintaining social distancing once the theme parks reopen. In fact, Dr. Pamela Hymel stated that she is currently exploring options for the Disney Parks including phased reopening, social distancing protocols, sanitization such as having hand sanitizer and frequent cleaning of the theme park, Cast Member training, and more. You can read more on social distancing, and other protocols Disney is looking into here.

Please stay tuned to Inside the Magic as we will be sure to update you as soon as we get any confirmation from Disney Parks themselves.

Do you currently have a Disneyland Resort reservation booked? What are your travel dates? Let us know in the comments.