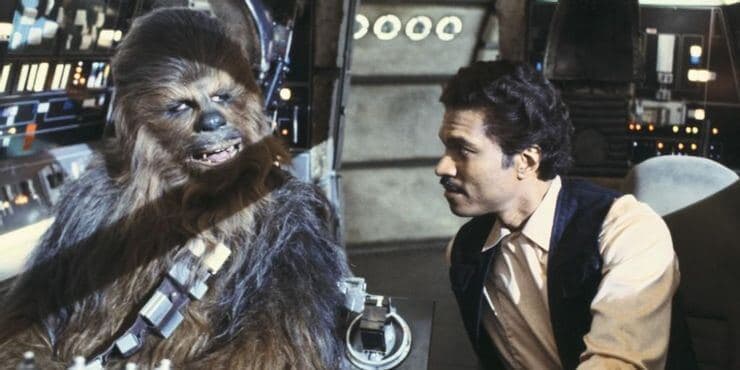 It’s a mystery that has stumped Star Wars fans for decades. Why the heck is Lando Calrissian in Han Solo’s clothes at the end of Episode V: The Empire Strikes Back? It’s certainly a weird moment, and one that you’ll likely shake your head at, then immediately forget.

Now, we know why Lando wears Han Solo’s clothes in the Millennium Falcon.

Why is Lando in Han’s clothes?

This mystery has baffled fans and its one of the few criticisms against Star Wars Episode V: The Empire Strikes Back. The main reason it’s so befuddling is that Lando is known for his flamboyant sense of style! He’s all about the capes and the brightly colored shirts. Why does he need to dress like lovable rogue Han Solo — especially after his friend had just been imprisoned in carbonite thanks to Darth Vader and Boba Fett.

As Lando and the gang had to head to the Falcon in a rush, it’s pretty reasonable to assume that he wouldn’t have the time to pack a change of clothes. Additionally, the Millennium Falcon was seemingly Han Solo and Chewbacca’s home, so it’s safe to assume he’d have a wardrobe there. Therefore, Lando took the clothes and wore them. Simple, right?

The plot thickens thanks to Billy Dee Williams

However, there are additional reasons why we saw Lando in Han’s clothes in Empire. For example, at New Orleans Comic Con in 2011, a fan asked the now-famous question and received a few different answers. First, the host claimed that the design was made by costumer designer John Mollo, who said that it “didn’t mean anything.” However, he also provided an in-universe explanation.

The host suggested that Han’s get up is part of the Correllian Corps uniform. Williams added that the character was a General, suggesting that this may be why Lando wears the uniform in this scene. Furthermore, the book Star Wars Made Easy shared:

“It’s been suggested that the outfit is the remnant of a flight uniform, and so a natural choice for any pilot. But really, what better way for the filmmakers to suggest that Han is really gone than to set Lando up in his replacement, complete with his ship and fashion sense?”

You can listen to the whole conversation in the video below.

So there you have it. Lando wears Han’s clothes for several reasons — it makes sense in his new position as a Rebel, it may harken back to his time in the Correllian military, and it’s just practical filmmaking.

The media took note of Lando in Han’s clothes

Both the fandom and other media didn’t miss Lando’s attire in Empire. The second part of the Family Guy parody of Star Wars even makes direct reference to it. Chewbacca (played by Brian) tells the audience to go and watch the actual movie to see the obscure moment for themselves.

The Star Wars franchise is full of little moments like this. However, very few actually have concrete answers from the creators, whether that be George Lucas or other artists like Mollo. It just goes to show what an iconic character Lando really is and how he became an essential part of the original trilogy. Indeed, the character would show up in the next movie (Return of the Jedi) and eventually return in the sequel trilogy.

Lando plays a vital role in destroying the second Death Star alongside Nien Nunb. He flies the Falcon as Luke Skywalker battles Darth Vader and Han and Leia take down the shield generator on the forest moon of Endor. He next appeared in the prequel movie, Solo: A Star Wars Story, this time played by Donald Glover. However, Billy Dee made a triumphant return in The Rise of Skywalker as Lando, alongside Chewie, Luke, and several other original trilogy characters.

One thing’s for sure; we love Lando!

What do you think of the iconic “Lando in Han’s clothes” scene? Let us know in the comments below.