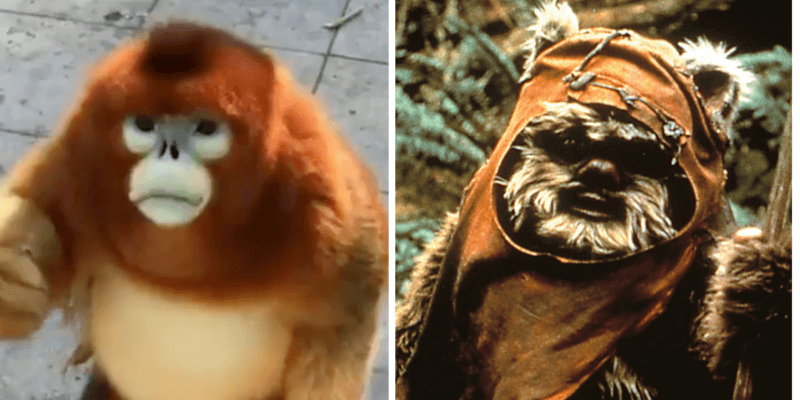 If you ever wished that you could see an Ewok in real life? Well, today you can as a video of a Monkey resembling the Star Wars creature has gone viral.

This video was posted by Twitter user Buitengebieden, who describes their channel as the “positive side of Twitter”. Since releasing the clip, it has had over six million views and has been liked more than 200,000 times. It shows a golden snub-nose monkey enjoying some attention as it stands on two legs like a person, or perhaps, an Ewok. Much like the Ewok Wicket, this fella seems to enjoy a treat!

Related: Bring ‘Star Wars’ Into Your Home With These DIY Paper Snowflakes!

What is an Ewok?

The furry “Teddy Bears” of the Star Wars universe made their first appearance in Episode VI: Return of the Jedi. They are locals of the forest moon Endor, which obviously plays a major role in the final third of that film.

The Ewoks initially start off as minor antagonists as they kidnap Princess Leia (Carrie Fisher), Han Solo (Harrison Ford), and Luke Skywalker (Mark Hamill). However, after Luke uses the force to levitate C-3PO (Anthony Daniels), the furry friends soon change their tune. Indeed, they even cuddle up to Leia and Han as 3PO retells the events of Episode IV: A New Hope and Episode V: The Empire Strikes Back.

Warwick Davis plays the most famous creature, known as Wicket the Ewok. However, other notable Ewoks include Paploo, Chief Chirpa, and Romba. Chirpa agrees to lend Ewok support to the Rebel Alliance and fight the invading Storm Troopers from the Galactic Empire on Endor. As for Romba, he’s sadly killed mid-battle during one of the film’s saddest moments.

Wicket (full name Wicket W. Warrick) even reappears for a cameo at the end of Episode IX: The Rise of Skywalker.

Say “Yub Nub” to all the Ewok fans!

Ewoks really are the “love them or hate them” characters of the Star Wars universe, alongside the Porgs from The Last Jedi. Speak to one Star Wars fan and they’ll love them, speak to another and they can’t stand the annoying “teddy bears”. However, nobody can deny how darn cute they are!

The Ewoks have actually proven pretty popular, however. They’ve even starred in their own movies! Caravan of Courage: An Ewok Adventure was made in 1984 and was followed by Ewoks: The Battle for Endor in 1985. There was even a tv show than ran from 1985 – 1986 simply titled Ewoks, which also took place on Endor.

So the next time you’re thinking about your favourite Jedi or Sith, remember these humble creatures from the forest moon of Endor. They helped destroy the second Death Star after all…

What do you think of this monkey? Let us know in the comments below.