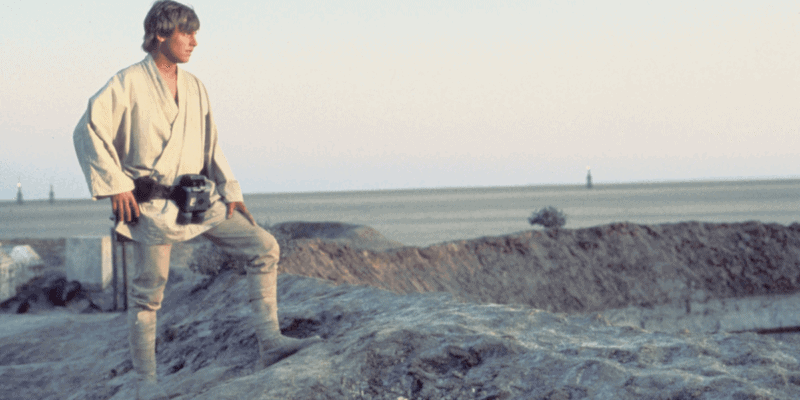 Since the Star Wars original trilogy released, fans have wondered which of their favorite planets could actually support life. The Star Wars galaxy contains a massive array of planets, each with a special ecosystem described by a singular adjective — desert, ice, forest, etc. Some planets are completely unforgivable, while others seem too beautiful to live on.

Unlike Earth — a host of numerous biomes — Star Wars‘ most famous planets, like Tatooine and Hoth, host only one environment. While there are exceptions that boast more than one climate, it’s safe to say that most of a galaxy far, far, away’s inhabitants are living in inhospitable worlds.

It appears that on Tatooine, it never rains and on Hoth, it never thaws. If you don’t dive deep in Wookieepedia (it’s a guilty pleasure) and study each planet, casual Star Wars fans might assume that most, if not all, worlds in your favorite galaxy are unlivable.

The Star Wars universe raises the question — Could a world with one, single environment viably support and sustain life?

It should be noted that in our own galaxy, scientists have confirmed the existence of nearly 2,000 exoplanets. But, in most cases, that’s all they know. No one exactly knows if a planet with one biome/climate is capable of housing life. Scientists and astronomy experts are still researching the possibilities of hospitable planets and finding discoveries each day.

Let’s look at which Star Wars planets could theoretically support life and be your future (imaginary) home.

The home-planet of both “Chosen One” Anakin Skywalker and Jedi Master Luke Skywalker and the first planet we visit in Star Wars: Episode IV – A New Hope (1977), Tatooine stands the test of time as THE Star Wars planet. Its harsh surface scorned by the twin suns and arid temperatures force moisture to be farmed from the air — like Matt Damon in The Martian (2015).

Could a dry planet really support Jawas, Tusken Raiders, and Banthas — and the occasional Krayt dragon or Sarlaac?

“I don’t remember seeing a lake or oasis on Tatooine, and maybe I missed it, but it seems like an awfully dry place for people to live, and it wasn’t clear to me if they were growing crops,” says National Air and Space Museum geoscience researcher Andrew Johnston.

He continued, “And where were the crops, and how were they irrigating them?”

Johnston states that moisture-farming circumstances are plausible and possible — Atacama Desert inhabitants in South America practice it, for example. To sustain the wide array of organisms on Tatooine, the planet would need a body of water to support the large population.

Our solar system has its own Tatooine and it is called Mars. Johnston says, “Mars is largely a desert world, but having an all desert world that has creatures that have grown up there and walk around is somewhat unusual.”

But, with an acceptable water source, some scientists believe that organisms would actually thrive in environments like Mars. This theory, of course, has yet to be tested with human lifeforms.

Home of the Ewoks and battle site of the Death Star II, the Forest Moon of Endor is a fan-favorite Star Wars planet. Filmed in the Redwood Forests in Northern California, the moon planet boasts a beautiful ecosystem of green forests and plenty of water sources (basically Oregon). Out of all the planets in Star Wars, this, at first glance at least, seems like one of the most livable, especially if you enjoy the great outdoors.

However, the Forest Moon of Endor would need to orbit in the sun’s habitable zone. As far as we know, there is no information surrounding the planet’s orbit other than it being the moon planet of a world with the same name that has two suns, the creatively titled Endor I and Endor II.

Before the theorized nuclear fallout from the Death Star II (post-Return of the Jedi) that caused the extinction of the planet, Endor would have to be in the “Goldilocks Zone” of its host star to be livable, as seen in Star Wars: Episode VI – Return of the Jedi (1983).

Andrew Jonhston says, “It all depends on the size of the star you have because some would be brighter or dimmer. But if it’s a sun like ours and if you’re at roughly the same distance away, it’s theoretically possible you could have things like trees.”

Less likely would be a planet covered in forest, and a moon planet sporting a globe-spanning forest would not be hospitable.

Naboo, a small pastoral world in the Mid-Rim and host world of the Gungan species, is “considered a world of classical beauty due to the aesthetics of its population centers,” according to Wookieepedia.

Naboo is not only the home-planet of Padmé Amidala and Sheev Palpatine, but the world is also one of the best maps in Star Wars: Battlefront II.

Unlike most other worlds, Naboo lacks a molten core but rather boasts rocky bodies and underwater tunnels. According to Wookiepedia,

“Naboo’s surface comprised a vast array of different landscapes, from rolling plains and grassy hills to swampy lakes caused by the water-filled network of deep-sea tunnels. The swamps acted as a gateway to the world’s seas, where legendary creatures dwelt.”

While the planet’s core is filled with natural plasma, a wide display of species lived in all of Naboo’s numerous environments — much like North America’s prairie lands and coastal country. Hospitable and capable of supporting organisms, Naboo is one of the only Star Wars planets that appears to be truly livable in real life.

Surprisingly enough, Hoth would actually be livable, but only in certain situations. The ice-planet has a lot more in common with Earth than one might think.

In The Empire Strikes Back (1980), we’re taken to the remote, frozen wasteland of Hoth. The inhospitable planet far from the Empire’s activities was the perfect hiding place for the Rebellion, but not so good for sustaining some types of life. It’s probable that the Rebels imported their food rather than trying to grow their veggies on the unforgiving planet — they could also have simply gotten scurvy. We’ll never know.

While many are certain that Hoth cannot sustain life, one must consider the possibility of Hoth hosting life under its ice shell.

“We know that there’s been several times in the Earth’s history where the Earth looked like that [Hoth] —in Snowball Earth phases when the whole planet gets glaciated. When that happens, the whole planet is like a reflective cue ball. … It only eventually gets unlocked when the CO2 levels get so high that the melting starts, and within 100 years you have a crazy, crazy increase in temperature.”

Under that ice and snow is a hospitable, beautiful world — much like Earth. Waiting to be unlocked by a massive increase in CO2 levels awaits a world that’s capable of sustaining life. However, it could take a few of Yoda’s lifetimes to see Hoth bloom in spring. Ice Ages are not generally short eras — just ask the dinosaurs.

Han Solo, Chewbacca, C-3PO, and Princess Leia (and, unfortunately for our heroes, Darth Vader) arrived in Bespin (AKA “Cloud City”) on a beautiful sunny day high above the clouds. Flying high with the Millenium Falcon and cloud cars, Bespin seems like living on a cloud.

“Bespin was a gas giant in the star system of the same name… Its riches manifested in the form of rare tibanna gas… Ugnaughts were employed to extract tibanna from repulsorlifted facilities whilst Bespin’s mostly human population resided in the open upper levels, exposed to a thin layer of breathable atmosphere in an area known as the ‘Life Zone.'”

Though we see Luke falling through the clouds during his fight with Darth Vader, suggesting a breathable atmosphere, scientists have confirmed that gas giants don’t supply breathable air.

“Nothing that we’ve seen so far matches that description. And what are they mining?” Andrew Johnston says.

The answer to that question, of course, is tibanna gas.

Every known real-world gas giant supplies plentiful amounts of hydrogen and helium, but little — if any — oxygen. On top of that, they produce a small source of heavier elements humans tend to mine, so Bespin’s mining operations aren’t that plausible either.

We’re not hating on Bespin, but considering that Jupiter, a gas giant, houses an atmosphere with nearly 90% hydrogen and 10% helium, Cloud City probably wouldn’t be the home to Lando Calrissian and his citizens.

Each new Star Wars story in the Skywalker saga (and beyond) introduces new, dream-like planets that came from the mind of George Lucas or were heavily inspired by so. In the sequel trilogy we saw two new desert planets, but again no evidence of scientific sustained life. However, that’s okay. Star Wars is meant to allow the audience to escape from reality with each movie, so keep dreaming of living on Mustafar from Star Wars: Episode III – Revenge of the Sith (2005) or with Din Djarin on his Razorcrest.

What do you think about these facts? Which Star Wars planet do you wish you could really visit? Let us know in the comments below!

Comments Off on Which ‘Star Wars’ Planets Could You Actually Live On?