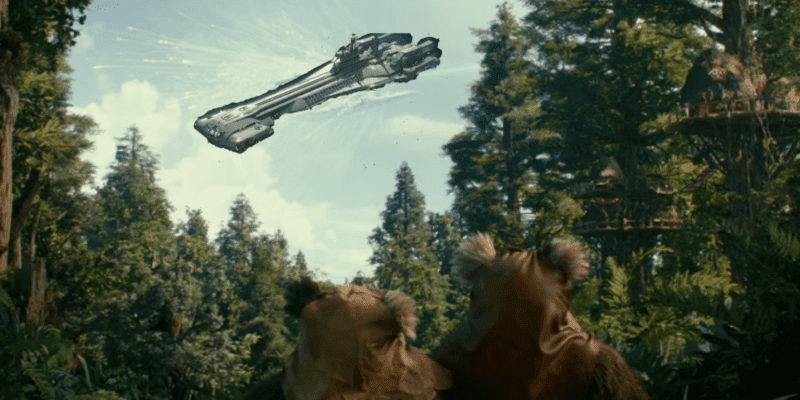 If you’ve ever wished you could visit Endor, Tatooine, Bespin, Dagobah, or any other planets in a galaxy far, far away, you’re not alone. Most Star Wars fans have at least one world they’d love to spend a night or two on.

Mine’s Corellia, just for the record.

What if, though, you actually could spend a night in an Endor treehouse surrounded by Ewoks? Or, perhaps, enjoy the high life in Lando Calrissian’s Cloud City? Or, even go to the dark side and visit Exegol?

The upcoming Star Wars Galactic Starcruiser hotel at Walt Disney World Resort could make your dreams into a reality. The new immersive hotel — officially a luxury starcruiser known as the Halcyon — is set to send fans skyrocketing into the Star Wars universe for a 2-night, 3-day trip.

It’s going to be incredible from what we know about the experience so far, but what if Disney Imagineers added even more to the story? They’ve already created Batuu, which is all about allowing Disneyland and Disney’s Hollywood Studios Guests to imagine their own Star Wars storylines, so why not take things one step further?

Much like Adventures by Disney allows Guests to add on extra days to their magical vacations — including longer stays in Paris and London — the Galactic Starcruiser experience could, theoretically, allow its intergalactic travelers to spend additional nights on other Star Wars planets, adding to the all-immersive experience Disney has already promised for Guests who stay at this resort.

To address the elephant in the room, yes, this would be expensive — perhaps prohibitively so. After all, both Batuu East and Batuu West cost a billion dollars. But, a girl can dream.

Plus, there are some viable reasons The Walt Disney Company should consider making the Star Wars hotel experience even bigger and better than it’s already expected to be.

Walt never shied way from a challenge when it came to creating extra-special experiences for his Guests, so why start now?

What would be the benefits for Disney?

Disney’s official webpage for the Galactic Starcruiser hotel confirms that it is still set to open in 2021, presumably in time for Walt Disney World Resort’s 50th Anniversary Celebration — whenever it is actually able to get underway.

While this is certainly exciting for those who can’t wait to book passage on the Halcyon, it is also a terribly unfortunate time — the current pandemic is still raging, after all — to be trying to convince people to book an indoor stay with people they don’t know in a building they aren’t allowed to leave for 48 to 72 hours, save for one port excursion to Star Wars: Galaxy’s Edge.

By allowing Guests to extend their stays in small, yet highly themed, Resort extensions — including, perhaps, some socially distanced outdoor options like the aforementioned Endor treehouses or even icy Hoth structures –Disney would be adding to the appeal. This might ultimately entice more people to take a trip to the Outer Rim sooner.

Furthermore, Disney could capitalize on the popularity of their current hit Disney+ series, The Mandalorian. The Jon Favreau show has arguably been the most successful foray The Walt Disney Company has had into the Star Wars universe since buying Lucasfilm in 2012 — the Star Wars sequel trilogy, starring Rey (Daisy Ridley), Poe Dameron (Oscar Isaac), and Finn (John Boyega), was met with mixed critical and fan opinions.

Imagine, for a moment, a version of Tatooine in which Guests could stay on Mos Pelgo, visit the local cantina, and maybe even run into Marshal Cobb Vanth or The Child (AKA Baby Yoda).

Related: Which Ice Planet Was in ‘The Mandalorian’ Chapter 10?

Finally, this would give Guests a reason to return to the Galactic Starcruiser multiple times. Currently, reports indicate that the immersive hotel experience will include a storyline that involves a stormtrooper invasion and certain character interactions — including Chewbacca, but no Han Solo, Luke Skywalker, or Leia Organa since they’ve all passed away by this point in the Star Wars timeline.

Pricing has been rumored to be similar to a 3-day Disney Cruise Line vacation, although official details have not been announced. If that’s true, however, Guests may only be inclined to visit one time, which could limit Disney’s pool of interested parties over time.

Adding additional Star Wars planet themed areas would give people a reason to take Galactic Starcruiser journeys more than once so they could extend their trips and visit different parts of George Lucas’s galaxy.

What do you think? Even though this is just a dream scenario, which Star Wars planet would you most like to extend your Star Wars hotel stay on?

Comments Off on Want to Visit Endor? Here’s How the ‘Star Wars’ Hotel Could Take You