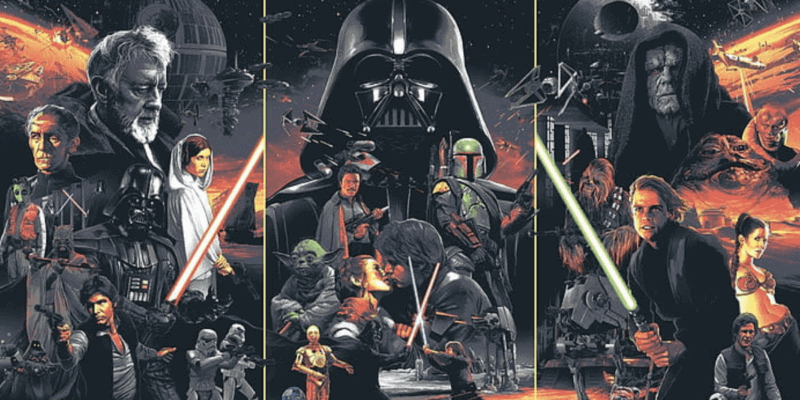 Believe it or not, the word “Ewok” is never said in any of the nine Star Wars films that comprise the Skywalker Saga.

It’s quite a surprise to many Star Wars fans, but it’s true. While watching Star Wars: Episode VI – Return of the Jedi (1983),  not one character utters the word “Ewok” on screen.

It makes some measure of sense that none of the films from the prequel trilogy, sequel trilogy, and even the first two films from the original trilogy mention these fuzzy creatures. Still, it’s baffling to realize that the Ewoks are never named in Return of the Jedi, which they prominently feature.

How did we know their names after watching the movie then?

Well, we actually learned about the Ewoks in the Return of the Jedi novel released about two weeks before the film came out. In James Kahn’s novel, the name “Ewok” is used prominently — especially when Threepio is convincing the furry fighter force to help the rebels.

Whether the Mandela Effect made everyone think that the word “Ewok” has been a household name since the release of Return of the Jedi or not, it’s baffling to realize that not Luke Skywalker, Princess Leia Organa, Chewbacca, or even Han Solo never call the furry species “Ewoks.”

Though C-3PO is “fluent in over six million forms of communication,” he too never says, “Ewok.”

If I had a dime for every time a casual Star Wars fan or enthusiastic mom at a Disney Park called an Ewok a “Wookiee,” I’d have enough money to buy myself Ahsoka Tano’s Legacy Lightsaber from Galaxy’s Edge.

The Ewoks are among the most beloved creatures from the Star Wars universe, and Wicket W. Warrick is a particular fan-favorite. Actor Warwick Davis — who brought the Ewoks to life at age 11 — got to reprise his legendary role in Star Wars: The Rise of Skywalker (2019) with a small cameo towards the end of the film.

Even though we never knew their name, the Ewoks’ popularity spawned two made-for-TV movies: The Ewok Adventure (1984) and Ewoks: The Battle for Endor (1985). George Lucas created the concept for both features, but they didn’t garner the attention that other Star Wars movies received at the time.

The cult-classic movies went unknown by many Star Wars fans, but the lucky few who remember those funky movies can enjoy them again on Disney+ very soon — on April 2, 2021.

“Adorable.” “Fierce.” “Fluffy.” Such words can only scratch the surface of the legacy of the Ewoks. Hopefully, one day, they’ll make an appearance at Star Wars: Galaxy’s Edge or a future Mandalorian season, but until then, they live in a galaxy, far, far away. Long live the Ewoks.

Did you know this? Let us know in the comments below!