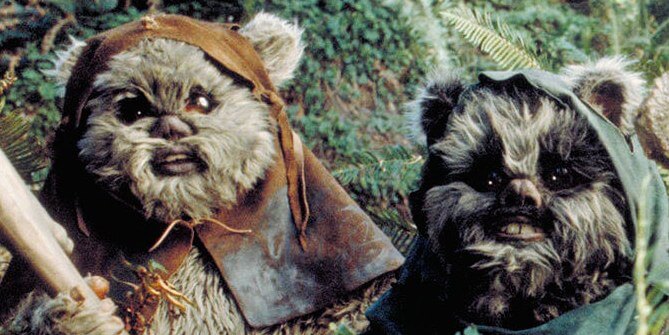 If you’re even a casual Star Wars fan, you probably know that there’s a lot more to the Star Wars story than the nine-film Skywalker Saga.

What you might not be aware of, though, is that there are little-known Star Wars films dedicated to the native inhabitants of the forest moon of Endor — the always adorable Ewoks!

Soon, Disney+ will start streaming Caravan Of Courage: An Ewok Adventure (1984) and its sequel Ewoks: The Battle For Endor (1985) on April 2. Also coming on that date are both seasons of the animated series, Star Wars: Ewoks. The confirmation comes via D23.

Both of these lesser-known Star Wars movies were based on stories by George Lucas, but were written and directed by different people.

Caravan of Courage was directed by John Korty and written by Lucas with Bob Carrau. IMDb features this synopsis of the film:

Wicket the Ewok [Warwick Davis] and his friends agree to help two shipwrecked human children, Mace [Eric Walker] and Cindel [Aubree Miller], on a quest to find their parents.

The sequel was helmed by brothers Jim Wheat and Ken Wheat.

The Battle For Endor is described as:

Marauders raid the Ewok village and steal a power supply they believe to be magical. Wicket [Warwick Davis] helps Cindel [Aubree Miller] escape the evil witch Charal [Sian Phillips], and they befriend a hermit [Wilfred Brimley] who may help them save the village.

The species may look cuddly — but they were also ingenuitive and not to be trifled with. Wookieepedia describes them as:

…sentient, diminutive, furry bipeds native to the forest moon of Endor. They were most notable for helping the Rebel Alliance defeat the forces of the Galactic Empire at the Battle of Endor, allowing the shield generator there to be destroyed, and in turn, the second Death Star.

Ewoks were curious individuals that stood about one meter tall; they were omnivorous and used spears, slings, and knives as weapons.

Are you excited that these obscure Star Wars movies about Ewoks are coming to Disney+ in just a couple of weeks? Have you ever watched them before? Tell us in the comments!