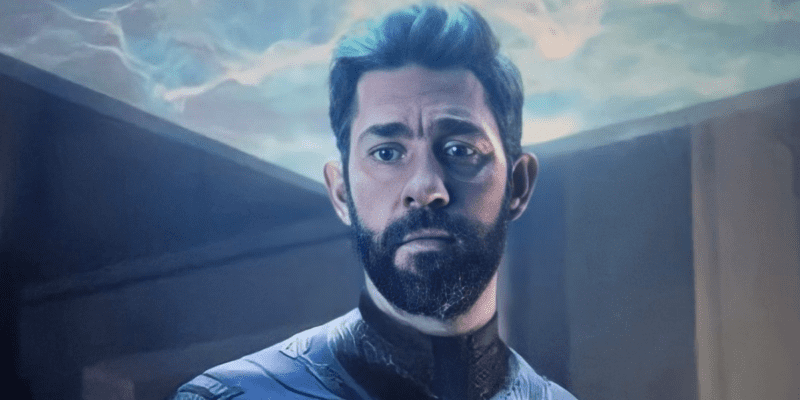 The US version of The Office (2005) remains one of the most binge-watched shows of all time, while the original British version of the same name is equally appreciated by fans, despite being seven seasons shorter than its American counterpart.

Both shows are teeming with all sorts of characters, many of whom most of us can relate to in some way, or have at the very least worked with in a real-life job. Some of us have even had bosses like David Brent (Ricky Gervais) and Michael Scott (Steve Carrell)!

But something we can’t necessarily relate to as much are superheroes. With that said, while it’s highly unlikely any of us have ever left an office environment to become a superhero, there are a number of characters from both versions of The Office who have!

Here are 10 characters from The Office who went on to star in the Marvel Cinematic Universe or the DC Extended Universe!

Ken Jeong has appeared in many films over the years, from The Hangover movies to Trans-Formers: Dark of the Moon (2011) — and that barely scratches the surface. As such, his role in The Office (US) is very blink-and-you’ll-miss-it.

He appears in the Season 2 episode “E-Mail Surveillance” as Bill, a member of Michael Scott’s improv group. But his stint in the MCU is even shorter, as he plays the unnamed security guard in Avengers: Endgame (2019) who frees Scott Lang/Ant-Man (Paul Rudd) from the Quantum Realm!

Since his role as misogynistic travelling salesman Chris Finch in the original British version of The Office (2001), alongside Ricky Gervais (David Brent), Martin Freeman (Tim Canterbury), and McKenzie Crook (Gareth Keenan), Ralph Ineson has enjoyed a successful career in Hollywood.

His most notable entries are the last three Harry Potter movies, in which he plays the formerly incarcerated Death Eater Amycus Carrow. However, many forget that he also has a small role as a Ravager Pilot in James Gunn’s Guardians of the Galaxy (2014).

Evan Peters plays Michael Scott’s nephew Luke Cooper in The Office (US), in the Season 7 episode “Nepotism”. Being a terrible assistant means that his time at Dunder Mifflin is brief, but Peters went on to play Peter Maximoff/Quicksilver in the X-Men movies and Deadpool 2 (2018).

The MCU version of Quicksilver (Pietro Maximoff), however, who appears in Avengers: The Age of Ultron (2015), was played by Peters’ fellow Kick-Ass (2010) star Aaron Taylor-Johnson. And Peters actually appears in the Disney+ series WandaVision (2021) posing as Wanda’s late brother Pietro.

Before making his first MCU appearance in Thor (2011), the lovable Idris Elba played the “Vice President of Northeast Sales” Charles Miner in the US version of The Office, whose first appearance is in Season 5’s “New Boss”.

While Miner isn’t seen again after the Season 5 finale “Company Picnic” (did the Scranton Strangler get him?!), he does play Asgardian gatekeeper Heimdall in all four Thor movies, as well as Avengers: Age of Ultron and Avengers: Infinity War (2019).

Before Pam Beesly (Jenna Fischer) started working at Dunder Mifflin, receptionist Dawn Tinsley (Lucy Davis) was the office-heartbreaker in the original British series. While she does end up with Tim Canterbury (Martin Freeman), she eventually moves onto another franchise altogether!

Lucy Davis plays Etta Candy in Patty Jenkins’ box office hit Wonder Woman (2017), alongside Gal Gadot’s titular Amazonian princess. Unfortunately, she only has a tiny cameo in the sequel Wonder Woman 1984 (1984), so here’s to hoping we see her in a future DCEU movie.

Actor Randall Park is a lot like Ken Jeong in that he shows up in a lot of comedy movies, like The Interview (2014) and The Office Christmas Party (2016). However, his role as actor Steve in The Office (US) is even shorter than Jeong’s!

In one of the show’s best pranks, Steve poses as Jim Halpert (John Krasinski) to convince Dwight Schrute (Rainn Wilson) he’s going crazy. Park is now a recurring MCU character, having so far appeared as S.H.I.E.L.D agent Jimmy Woo in Ant-Man and the Wasp (2018) and WandaVision.

Many people forget that Amy Adams appears in the US version of The Office, in Season 1’s “Hot Girl”, as Katy Moore, who ends up briefly dating Jim Halpert (John Krasinski). Now, the Enchanted (2007) star has four superhero movies under her belt!

While John Krasinski shot to infamy with the role of Jim Halpert in the US version of The Office, it’s all too easy to forget that his character was based off of Tim Canterbury from the original British series, who is played by now-Hollywood megastar Martin Freeman.

The Office is obviously a great place to launch your superhero career, because Freeman has  appeared in Captain America: Civil War (2016) and Black Panther (2018) as Everett K Ross, and will be returning in Black Panther: Wakanda Forever (2022) and Secret Invasion (2023).

James Spader is best known for playing this very creepy and unnerving character — and no, we’re not talking about his MCU villain Ultron — we’re actually referring to Robert California in the US version of The Office (whose real name is ultimately revealed to be Bob Kazamakis).

As for the MCU, Spader does of course lend his wonderful vocal talents to the aforementioned AI villain in Avengers: Age of Ultron. While the 2015 sequel is easily the weakest of the four Avengers movies, hearing Robert California in android-form is spine-tingling stuff!

If you’re all caught up on the MCU, you’ll know that John Krasinski, best known for playing lazy salesman and professional prankster Jim Halpert in the US version of The Office, appeared as Dr. Reed Richards/Mr. Fantastic in this year’s Doctor Strange in the Multiverse of Madness (2022).

Whether or not Krasinski will be reprising his role as the stretchy Fantastic Four leader remains to be seen. But either way, it was a wonderful surprise seeing “Jim” appear in the MCU, even if he does end up on Wanda’s bad side quite quickly (perhaps he played one too many pranks on her).

Which of these is your favorite character from The Office? And which other characters would you like to see appear in the MCU or the DCEU? Let us know in the comments down below!