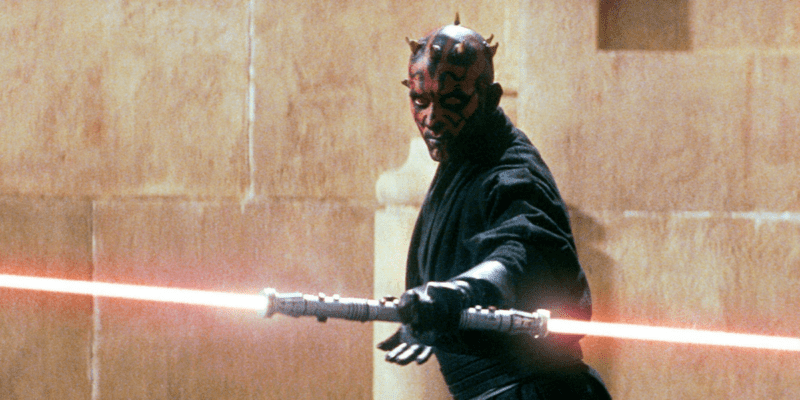 Darth Maul is easily among the most interesting villains in the Star Wars universe. While his time in Star Wars: Episode I — The Phantom Menace (1999) is short-lived, he went on to appear in animated show Star Wars: The Clone Wars (2008) and its follow-up Star Wars: Rebels (2014).

Darth Maul has had far more screen time on the animated side of the faraway galaxy than he has in live action, and the only other Star Wars movie he has appeared in since The Phantom Menace is Solo: A Star Wars Story (2018), in a brief cameo at the end of the film.

Ray Park reprised his role as Darth Maul in the film, with Sam Witwer lending his vocal talents, having done so in both the animated shows (actor Peter Serafinowicz voices him in The Phantom Menace). Park also returned to perform motion-capture in The Clone Wars finale.

But when it comes to live action, as is the case with many Star Wars characters, we don’t think Darth Maul should be limited to just one actor. And though rumors of his own live-action Star Wars TV series continue, we expect to see the twisted Dathomirian return in some capacity.

For now, here are six actors who we think would be perfect for the role of Darth Maul!

Michael Fassbender is an extremely versatile actor, but you only really need to watch Alien spin-off movies Prometheus (2012) and Alien: Covenant (2017) to see that he has the talent to pull off a character like Darth Maul. Cold? Detached? Merciless? Check, check, and check.

His performance as David, a droid going through an existential crisis that will have disastrous consequences, is unnerving and chilling to say the least. The 45-year-old Irish actor also has an incredibly convincing English accent in the films. As such, we think Michael Fassbender could easily pull off Darth Maul.

We know what you’re thinking — Jude Law has already been cast as a Star Wars character. While a name, or any other information for that matter, is yet to be revealed, we did get our first glimpse of him at last weekend’s D23 Expo, in a teaser for the upcoming live-action show Star Wars: Skeleton Crew (2023).

But we still think the Fantastic Beasts actor would be perfect as Darth Maul. He already has the accent, and he’s also great at playing villains, like Yon-Rogg in Captain Marvel (2019). Jude Law will also be playing Captain Hook in the upcoming Peter Pan & Wendy (2023) — need we say more?!

Jamie Campbell-Bower is fast becoming a household name. While many have likely forgotten that he plays the “flashback” version of dark wizard Gellert Grindelwald in some of the Harry Potter and Fantastic Beasts movies, his performance as yet another dark wizard hasn’t gone unnoticed.

In Stranger Things 5, Jamie Campbell-Bower plays supernatural villain Vecna/One/Henry Creel, and he also played Caius in the last two Twilight movies. So, the charismatic 33-year-old actor is no stranger to villainous roles, and we think this guy has Darth Maul written all over him.

Sam Witwer is no stranger to the Star Wars universe. Having first visited a very different faraway galaxy in the excellent Battlestar Galactica (2004) as Crashdown, alongside Katee Sackhoff (Kara Thrace/Starbuck), who is now also a Star Wars character, Witwer is now best known for playing Galen Marek/Starkiller in the Star Wars: Force Unleashed (2008) video game.

However, as we’ve already mentioned, Witwer, 44, has already played Darth Maul in both The Clone Wars and Rebels, and he also voiced the Son in the former, and Emperor Palpatine in the latter. So we would love to see him bring Darth Maul — one of the best Star Wars villains ever — back to life in a live-action capacity!

Not so long ago, it would have been impossible to imagine Christian Bale playing a villain in the Marvel Cinematic Universe. But now, it’s hard to imagine Thor: Love and Thunder (2022) without him, because Gorr the God Butcher is one of the most terrifying villains in the MCU.

Christian Bale’s character exudes Darth Maul vibes from start to finish — there’s the baldness, the face/body tattoos, his chilling performance, and also Bale’s gaunt face in the film. The only real challenge for The Dark Knight (2008) actor, we think, would be nailing down that English accent, as his seems to vary from scene to scene, no matter the film!

We didn’t necessarily intend to rank these actors from the least ideal to the most ideal, but the fact that we’ve subconsciously placed James McAvoy at No. 1 probably suggests that we think he’s the best actor to play Darth Maul.

Forgetting all his other excellent performances, McAvoy is utterly fantastic in the role of Kevin Wendall-Crumb in the M Night Shyamalan film Split (2016), the “surprise” sequel to Unbreakable (2000) and precursor to Glass (2019).

Kevin Wendall-Crumb has dissociative identity disorder, and lives with 23 distinct personalities. Split might just be James McAvoy’s tour de force, and somewhere between his elegant-yet-menacing Patricia and his monstrously powerful alter The Beast is the perfect Darth Maul.

All things Star Wars are now streaming on Disney+, such as the original trilogy, prequel trilogy, sequel trilogy, animated shows, and live-action ones such as The Mandalorian (2019), The Book of Boba Fett (2021), and Obi-Wan Kenobi (2022).

Which of these actors do you think would make the best Darth Maul in a future Star Wars movie or live-action TV series? Let us know in the comments down below!