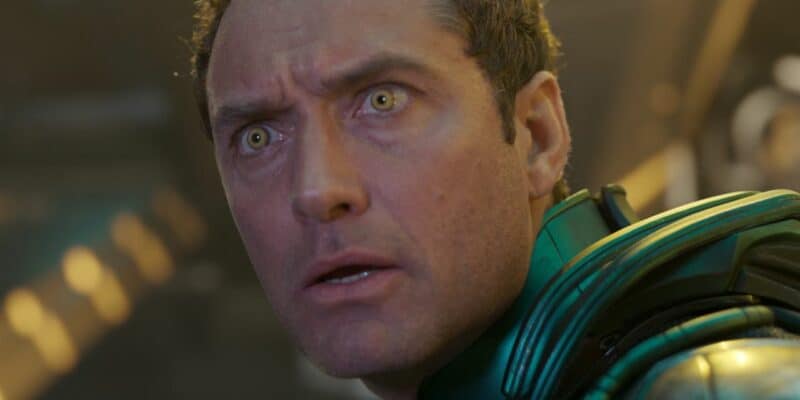 Jude Law has been a household name for decades, but more recently, he’s been making a name for himself in major blockbuster franchises. In 2018, he starred in Harry Potter spin-off Fantastic Beasts: The Crimes of Grindelwald (2018) as a young version of Hogwarts headmaster Albus Dumbledore.

The following year, he played a villain in the Marvel Cinematic Universe movie Captain Marvel (2019), opposite Brie Larson’s titular female superhero. And this year, he returned to the Wizarding World in Fantastic Beasts: The Secrets of Dumbledore (2022).

So, where next for the 49-year-old British actor? Well, how about everyone’s favorite faraway galaxy? That’s right — Jude Law is set to appear in his own live-action Star Wars TV series on Disney+ titled Star Wars: Skeleton Crew (2023).

While the upcoming show was announced earlier this year during Star Wars Celebration, Disney’s D23 Expo, which took place over the weekend in Anaheim, California, gave us our first glimpse in the form of a photograph of Law in a galaxy far, far away.

Check out the below tweet by @Ashley Carter, which was taken during the Lucasfilm panel at the D23 Expo on Saturday:

The first image of Jude Law in the new Star Wars series Skeleton Crew released. The series, set in the New Republic era, is about a group of kids who get lost in the galaxy. #D23Expo

The first image of Jude Law in the new Star Wars series Skeleton Crew released. The series, set in the New Republic era, is about a group of kids who get lost in the galaxy. #D23Expo pic.twitter.com/sbMBeVoQvo

Very little is known about this project, but the fact that a major Hollywood star like Jude Law is headlining his own live-action Star Wars series can only be a good thing. We do, however, know that child actors Kyriana Kratter and Ravi Cabot-Conyers will be joining Law.

In terms of its plot, it was confirmed at Star Wars Celebration that Skeleton Crew will be set during the New Republic era, orbiting the same timeframe as The Mandalorian (2019) and other interconnected spin-offs The Book of Boba Fett (2021) and the upcoming Ahsoka (2023) series.

StarWars.com says that “Star Wars: Skeleton Crew will center around a group of children lost in space, and be set in the New Republic timeframe.” Filming started earlier this month in Los Angeles, and no other details are known at this time.

Star Wars: Skeleton Crew will be released on Disney+ in 2023. Jude Law will also be playing Captain Hook in the upcoming live-action reboot Peter Pan & Wendy (2023), which was also revealed at D23.

Before Skeleton Crew, a number of live-action Star Wars shows will premiere on Disney+. Rogue One: A Star Wars Story (2016) prequel series Andor will begin streaming on September 21, The Mandalorian Season 3 will arrive in February 2023, and the Ahsoka series some time thereafter.

There are also a number of animated Star Wars shows coming up too, such as Star Wars: The Bad Batch Season 2, Star Wars: Tales of the Jedi (2022), and “preschool” series Star Wars: Young Jedi Adventures (2023).

Are looking forward to Star Wars:  Skeleton Crew? Let us know in the comments down below!