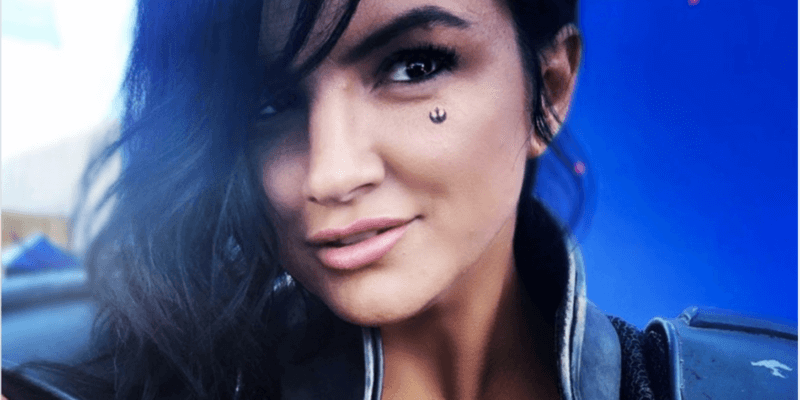 Gina Carano was fired from The Mandalorian by The Walt Disney Company after controversial social media posts caused an online war, but that didn’t stop the actress from getting back at Hollywood in her new movie.

The Star Wars universe welcomed Gina Carano’s Cara Dune in The Mandalorian season one, quickly becoming a fan favorite among many viewers. Soon enough, Cara Dune was a returning character and was even billed her own spin-off series, Rangers of the New Republic.

Playing a significant role in The Mandalorian season two as a Marshal for the New Republic, fans were shocked to learn that Carano wouldn’t be returning for a season three or her own Star Wars series.

Though Cara Dune’s presence would no longer be felt in the Skywalker saga, her co-stars and reportedly Jon Favreau himself fought for her Hollywood safety.

Now, after a year of being fired by The Walt Disney Company, Gina Carano is starring in and producing her feature film:

My heart skipped a few beats when I saw this credit for the first time.
I like how that feels. #TerrorOnThePrairie @realDailyWire

Thank you for providing a safe space & opportunity for so many.

My heart skipped a few beats when I saw this credit for the first time. ✨
I like how that feels. #TerrorOnThePrairie @realDailyWire
Thank you for providing a safe space & opportunity for so many. @benshapiro @JeremyDBoreing pic.twitter.com/69mOp3IeB2

Terror on the Prairie (2022) is just one of two controversial movies that Carano is starring in, with the other being a look into the life of Hunter Biden.

After she departed from Star Wars, Gina Carano shared that she was “bullied” by the media and public alike, but that her Terror on the Prairie project with The Daily Wire and Ben Shapiro will “take down the Death Star.”

Gina Carano’s brand new picture has a current rating of 8.3/10 on IMDb, with the Hallie McAllister actress bringing in immense popularity with recent social media posts and more:

Tune in tonight to watch #TerroronthePrairie only on @realDailyWire
use code “Gina” when you sign up and get 25% off.

Thank you to the cast, crew & everyone who has supported this journey. You made this all possible.

Tune in tonight to watch #TerroronthePrairie only on @realDailyWire use code “Gina” when you sign up and get 25% off.

Thank you to the cast, crew & everyone who has supported this journey. You made this all possible. ❤️ pic.twitter.com/ysAM03yg11

Since Terror on the Prairie is only viewable with a Daily Wire subscription, not every fan can watch the new film, resulting in the absence of a Rotten Tomatoes score.

Nonetheless, this western picture is reportedly a full-blown production with a professional Hollywood crew and everything, harkening towards independent film-making to tell different narratives.

While the MMA fighter isn’t returning to the Star Wars saga anytime soon, it’s clear she’s not letting her past stop her from telling new stories and broadening her acting horizon.

Should Gina Carano return to The Mandalorian? Comment below!