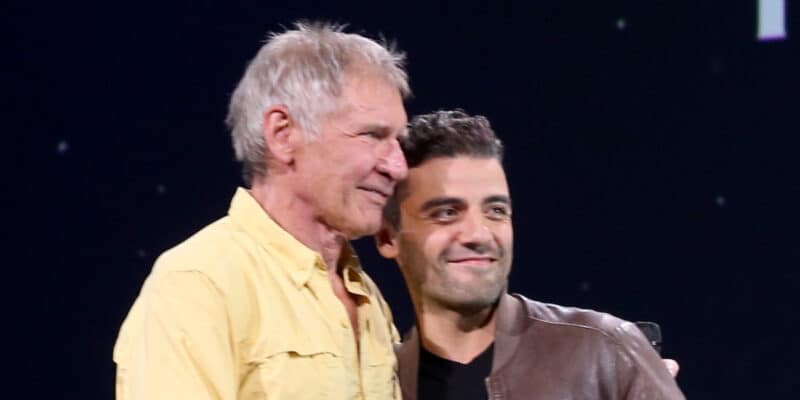 Harrison Ford (Air Force One, What Lies Beneath) is nothing if not a Hollywood legend.

Related: Harrison Ford Is Trending For the Weirdest Reason Ever

The trio skyrocketed as pop culture icons, going on to appear in Star Wars: Episode V – The Empire Strikes Back (1980) and Star Wars: Episode VI – Return of the Jedi (1983). Then, despite his well-documented distaste for the Star Wars franchise (and Force ghosts, in particular), Ford returned with his costars for Disney’s sequel trilogy.

Ford also played a major role in the first sequel trilogy movie, Star Wars: Episode VII – The Force Awakens (2015), in which he was ultimately killed by him and Princess Leia’s son, Kylo Ren/Ben Solo (Adam Driver).

In a recently resurfaced story from the set of Episode VII, it seems that the famously sarcastic star had it in for Isaac. One article shared:

Isaac said during filming at one point he could “feel” someone staring at him, and turned to find Harrison Ford staring intently at the back of his head. Once discovered, Ford reportedly pointed at Isaac’s hair and said, “wig.” When Isaac asked what he meant, Ford answered, “You’re wearing a wig.” After Isaac assured the Han Solo actor that it was his real hair, Ford looked at him with what Isaac called a mixture of “disdain and also impressed.”

The Moon Knight actor went on to share that, despite Ford’s seemingly good-natured “disdain” for him, he asked the Star Wars icon — a real-life pilot — for advice about playing Dameron. The aforementioned article shared that “Ford’s response sounds about as Harrison Ford as you get. Ford reportedly answered, ‘It’s fake, and it’s in space.'”

Isaac also had a unique encounter with another original trilogy legend. Prior to her untimely passing, Fisher slapped the younger star over 40 times to get the perfect take while filming Star Wars: Episode VIII – The Last Jedi (2017).

In a prior interview on The Late Show With Stephen Colbert, Golden Globe Award winner Isaac shared:

“…a large amount of the stuff that I got to do was with Carrie, which was amazing…I remember the first day of shooting was a scene with Carrie and it was still — you know, oftentimes, the first day, the filmmakers, everybody’s trying to get the tone and figure it out — and, I remember, it was a scene where I come to talk to her and she was very upset with me and she slaps me and Rian [Rian Johnson] kept doing it over and over…”

As for Ford’s and Isaac’s respective futures in the Star Wars universe, never say never. Although Isaac has expressed that he is done playing Dameron, Lucasfilm President Kathleen Kennedy has assured fans that various sequel trilogy characters will return.

Ford, for his part, is officially reprising his role as Dr. Henry Jones, Jr. in the as-yet-untitled Indiana Jones 5. The 79-year-old is also rumored to have inked a deal to return as Han Solo, but this has not been confirmed by Lucasfilm or The Walt Disney Company.

Currently, Ford is gearing up to film his first-ever TV series, which will air on AppleTV+.

Do you hope Harrison Ford returns to the Star Wars galaxy?