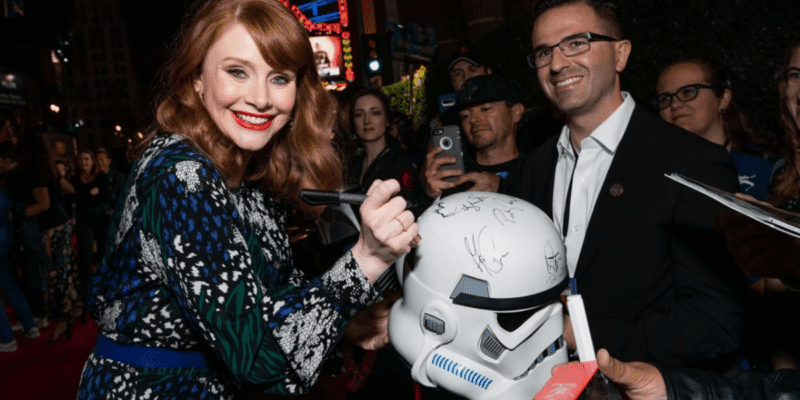 The Star Wars universe owns a multitude of The Mandalorian director Bryce Dallas Howard for her revolutionary work, and now fans want her to take over Marvel’s Fantastic Four. But, BDH just shot down all rumors.

Fans are now tossing Edgar Wright’s name into the mix, begging The Book of Boba Fett, director as Jurassic World (2015) actress, to take over the MCU with her film-making skills, but as the role of Susan Storm.

She could still direct though which would be awesome!

She could still direct though which would be awesome!

When given a Funko Pop! of Susan Storm/Invisible Woman to sign at a Jurassic World: Dominion (2022) premiere in Mexico City, Howard responds:

“Oh my God! [laughs] I don’t think it’s happening—I mean, I know [this doesn’t] involve me or anything. I swear to God, I swear to God. Yeah, yeah, for real. Total rumors. Total rumors, but you know, yeah… Thank you, but I’ll sign the [Funko] just for fun…”

Though Howard shoots down the rumors of starring in the MCU’s Fantastic Four, she could still direct:

She already has a good working relationship with Disney. I think she’d be a pretty fantastic director to tackle the FF in the MCU

She already has a good working relationship with Disney. I think she’d be a pretty fantastic director to tackle the FF in the MCU

One fan shares the opinion of many:

would love for her to direct it

would love for her to direct it

The Marvel Cinematic Universe is open for a new director to take over Fantastic Four. With calls for Edgar Wright to Sam Raimi to take over the project, it’s clear that any great storyteller could lead this new superhero group in the right direction.

Nonetheless, Watts is reportedly still on board for a Spider-Man 4 with Tom Holland’s Peter Parker and Zendaya — resting up before hitting Marvel’s New York again.