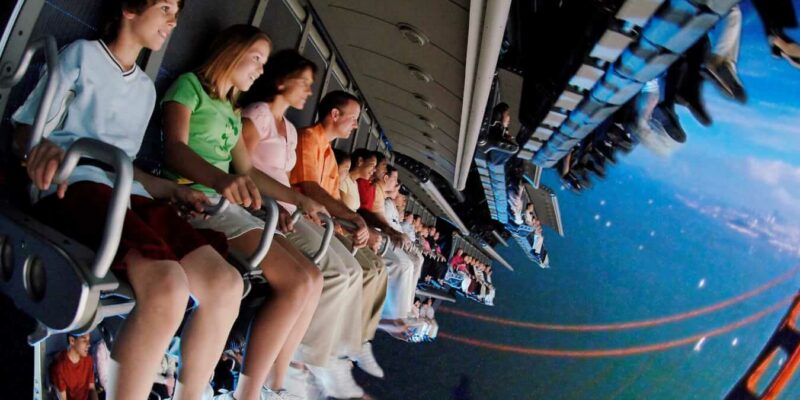 Soarin’ Around the World is a popular Disney attraction located at both Walt Disney World and Disneyland Resort. The 4-D ride brings Guests up into the air as they are transported around the world, viewing iconic landscapes and wonders while feeling as if you are actually there.

Guests love visiting the Disney Parks to experience this one-of-a-kind attraction, but now it looks like a ride, very similar to Soarin’, is available at a New York exhibit.

For starters, if you have never experienced Soarin’ Around the World at either Disney World or Disneyland, the description of the EPCOT version is as follows:

New York’s RiseNY is an exhibit in New York City that allows visitors to embark on a journey through New York’s most famous sites and moments. At the end of the exhibit, visitors can “fly” over the iconic skyline on a ride that suspends you 30 feet in the air — sound familiar?

Embark on a three-part journey that lifts and connects you to New York City’s most famous sites and moments. Start with a captivating film by award-winning documentarian Ric Burns, explore museum-style galleries that transport you through the city’s expansive pop-culture evolution. Then, fly over the iconic skyline on a soaring ride that suspends you 30 feet in the air! Get ready to fall in love with New York all over again.

ABC’s Michelle Charlesworth visited the RiseNY exhibit, and brought viewers into the room where the ride is, which as you can see in the image above, is identical to Disney’s Soarin’ attraction.

So, if you are in the New York area, be sure to swing by the RiseNY exhibit and you can get your Disney fix thanks to the similar Soarin’ attraction!

Are you in the New York area? Will you be swinging by the RiseNY Exhibit? Let us know in the comments below.

Comments Off on Did a New York Exhibit Rip Off Disney’s Soarin’ Attraction?