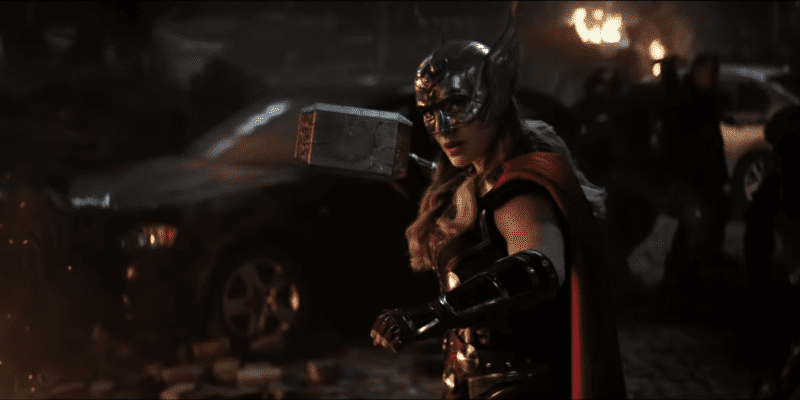 Natalie Portman’s Mighty Thor won’t be around for very long in the MCU due to a new merchandise leak.

As Thor’s ex-girlfriend, Jane Foster has already had some time in the MCU as an astrophysicist. It was revealed that Jane broke things off with Thor right before Thor: Ragnarok (2017) and fans thought that would be the last time they would hear from Foster in the MCU.

Then Thor: Love and Thunder (2022) was revealed and Kevin Feige brought Portman on the stage and handed her a Mjolnir replica as he announced that Jane would be becoming Mighty Thor just like in the comics. Since the MCU tends to stray away from the comics, fans were confused at how Jane would become Thor since Hela had shattered the mighty hammer in Ragnarok.

Based on new merchandise for Mighty Thor’s helmet, fans get to learn more about how Jane will become the next Thor and why things won’t end well for the character. Here’s the official description explaining what will happen to Mighty Thor:

Suffering from cancer, astrophysicist and Thor’s ex-girlfriend, Jane Foster, visited New Asgard and her life was changed forever. Mysteriously, the broken pieces of Mjolnir, the hammer of the thunder god, transformed her into the Mighty Thor and gifted her the superpowers of Thor, to battle threats internal and external. Wielding Mjolnir herself, she had become a godly protector and a new hero was born!

With the help of Thor, Valkyrie, and the Guardians of the Galaxy, the Mighty Thor was faced by the powerful Gorr, the God Butcher. With divine powers himself, Gorr was driven to rid the universe of gods wherever he found them. Battling cancer in her human form and Gorr in her godly form, Jane Foster was embroiled in an epic struggle with plenty of love and thunder!

When Jane turns into Thor, any of the chemotherapy she takes to cure herself leaves her body, and her cancer grows back faster when she is Thor. This leads to Jane learning later on that being Thor is actually killing her. At one point, Doctor Strange explains to the female hero that if she turns into Thor one more time, she will die from her cancer. When Asgard is under siege, Jane sacrifices herself to save Asgard and dies a noble death.

For the Marvel Cinematic Universe, it seems that perhaps Chris Hemsworth’s Thor won’t be retiring just yet unless Marvel plans to no longer have Thor be present in the MCU. Jane’s time to live means that at most, she has a few films before she will die, but if Marvel continues forward and has Jane struggle with cancer for several movies, it will get old quickly as it will be apparent that Marvel doesn’t want her to die.

Most likely, Jane’s time as Thor will be quick and meaningful as she will be sacrificing herself for the greater good.  It makes sense that Jane will end up getting a solo movie after Thor 4 where they will explore what would be Jane’s final adventure with Mjolnir before dying. If they wanted to give Jane a happy ending, then the hero would have to put down the hammer and not return as Thor to recover from her cancer.

Related: Everything You Need to Watch Before Seeing ‘Thor: Love and Thunder’

How long do you think Natalie Portman will be Thor? Let us know what you think!