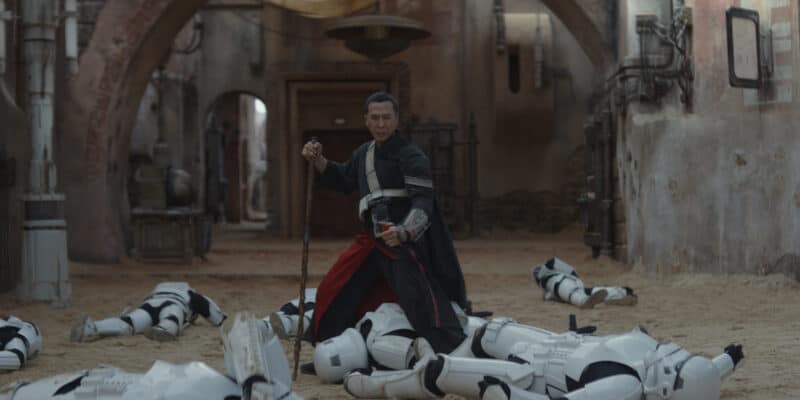 Rogue One: A Star Wars Story (2016) was The Walt Disney Company and Lucasfilm’s first standalone Star Wars film — sequel trilogy movie Star Wars: Episode VII – The Force Awakens introduced Rey (Daisy Ridley), Poe Dameron (Oscar Isaac), and Finn (John Boyega) one year earlier in 2015 — and, at times, it seemed it might not ever come to fruition.

Rogue One infamously faced directorial issues, script rewrites, and production delays. In the end, though, the film introduced Star Wars fans to some characters they quickly grew to love, including Diego Luna’s Captain Cassian Andor, who is set to get his own prequel series on Disney+ next year.

Now, another fan-favorite Rogue One actor, Donnie Yen, is speaking out about a possible return to the Star Wars franchise as Chirrut Îmwe. Yen recently shared:

“Well, I would definitely consider it. I had a great time shooting Rogue One, and I guess people like my character. It really depends, you don’t know what they’re thinking. I leave it up to Disney to sort it out. We’ll see. I believe in destiny. A lot of times, what brings people together in one film, it’s all about timing and destiny.”

It is highly unlikely that Yen, Felicity Jones (Jyn Erso) — who has also teased a return to the Star Wars story after supposedly being killed by the Death Star blast — Alan Tudyk (K-2SO), and the rest of their motley crew of Rebel Alliance rogues will return in Andor alongside Luna.

The series will take place about five years prior to Rogue One and Star Wars: Episode IV – A New Hope (1977), before the rakish Rebel spy knew the rest of the Rogue One crew.

Related: Meet the Most Illegal Weapon in ‘Star Wars’

This means that there is certainly room for characters like Erso and Imwe to return, perhaps in shows set prior to Rogue One, not dissimilar from Andor.

Deeply spiritual, Chirrut Îmwe believes all living things are connected through the Force. His sightless eyes do not prevent him from being a highly skilled warrior. Though he lacks Force abilities, this warrior monk has rigorously honed his body through intense physical and mental discipline.

More on Rogue One: A Star Wars Story

Do you hope to see Donnie Yen return to the Star Wars galaxy?

The next Star Wars feature film is Star Wars: Rogue Squadron (2023). Until then, fans can look forward to The Mandalorian Season 3, Ahsoka, Obi-Wan Kenobi, and Andor in 2022. The next live-action Star Wars project is The Book of Boba Fett in December 2021.

Comments Off on “I Believe In Destiny,” ‘Star Wars’ Actor Says of Return to Franchise