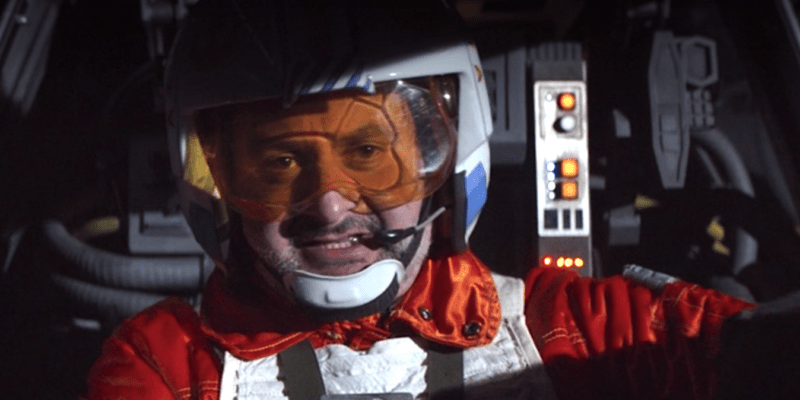 When the first Mandalorian spinoff series, The Book of Boba Fett, finished filming in June 2021 the cast and crew received “wrap gifts”, as is tradition in the film and television industry.

At the time, series star Ming-Na Wen (Fennec Shand) shared photos of some of her spoils, writing:

Now, some astute fans have realized that one particular Book of Boba Fett wrap gift may signal the return of a fan-favorite character from both seasons of The Mandalorian so far, in Chapter 6 (“The Prisoner”) and Chapter 10 (“The Passenger”).

It seems that Trapper Wolf (Dave Filoni) may be making his return to The Mandalorian universe in the upcoming series, which Mandalorian showrunner Jon Favreau has called “The Mandalorian Season 2.5″.

One article noted that a newly uncovered pin — that was actually already being sold by designer Bryan Waldron prior to The Book of Boba Fett filming:

However, instead of the traditional pilot helmet, the pin shows Filoni wearing his signature cowboy hat but emblazoned with his character’s wolf detailing.

Per Waldron, the film was ordered in bulk because members of The Book of Boba Fett cast and crew loved it so much. It is not known, however, if the pins were ordered specifically because Filoni will be appearing as Trapper Wolf in the series.

While Robert Rodriguez — who directed Boba Fett’s return to the Star Wars franchise in The Mandalorian Season 2, Episode 6 (“Chapter 14: The Tragedy”) — will serve as showrunner for The Book of Boba Fett, Filoni has been confirmed as both executive producer and director for the upcoming series.

This pin is, however, the first indication we have that Trapper Wolf will also be returning to the Star Wars universe. And, where there’s Wolf, there is often Carson Teva (Paul Sun-Hyung Lee), so it’s possible that both fan-favorite pilots could return when The Book of Boba Fett begins streaming in December 2021.

At this time, little is known about the plot of the series, except that it will be set on Tatooine — the famous Mandalorian post credits scene saw Fett and Shand storm Jabba the Hutt’s former palace and kill Bib Fortuna (Michael Carter) to take Jabba’s throne — and star Temeura Morrison as iconic bounty hunter Boba Fett and Wen reprising her role as Shand.

It is not yet known if Jedi Knight Luke Skywalker (CGI Mark Hamill) — who made his triumphant return to Star Wars in The Mandalorian Season 2 finale episode (“Chapter 16: The Rescue) — and his new Padawan, Grogu, will appear in the upcoming spinoff, or if the rumored Luke Skywalker series will come to fruition with Rangers of the New Republic scrapped due to Gina Carano’s firing.

At this time, however, none of these cameos have been confirmed — but, from the looks of things, Trapper Wolf’s comeback just might have been.

Do you want to see Dave Filoni come back as Trapper Wolf? Don’t forget to check out the Hasbro Star Wars The Black Series Trapper Wolf action figure online!