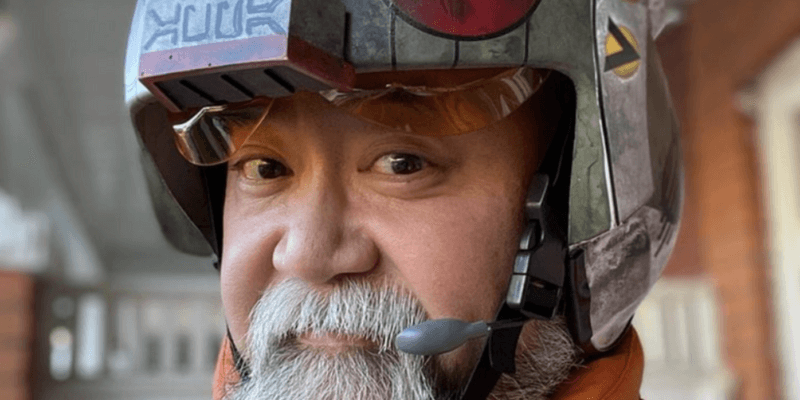 The actor — best known as patriarch Appa on Canadian Broadcasting Company (CBC) hit, Kim’s Convenience — ultimately convinced Cara Dune (Gina Carano) to become a New Republic Marshal on the planet Nevarro, setting her up for a starring role in Mandalorian spinoff, Rangers of the New Republic.

Following Lucasfilm President Kathleen Kennedy’s spinoff announcement at the 2020 Disney Investor Day event, however, Carano was fired from the Star Wars franchise due to “abhorrent” Tweets on her personal Twitter platform.

This, of course, left the status of Rangers of the New Republic up-in-the-air. It is set to air concurrently with The Mandalorian Season 3 and another spinoff show, Ahsoka. None of the three series have release dates at this time.

Current reports indicate that Star Wars Rebels fan-favorite character, Ghost ship pilot Hera Syndulla, may make her live-action debut in Rangers. But, it seems that some fans online have other plans — and they involve Lee.

Kim’s Convenience was abruptly canceled after four seasons, leaving the cast and crew shocked. Lee shared with CBC News that he was “blindsided” by the end of the show. Star Wars fans are hoping, though, that the end of this series might open the door for Lee to return to the Star Wars universe as Teva in a larger capacity.

With Raya and the Last Dragon and the upcoming Marvel Studios movie, Shang-Chi and the Legend of the Ten Rings, The Walt Disney Company is clearly moving toward more Asian representation in their content.

Here’s what some fans are saying about the future of Rangers of the New Republic.

Omg if Simu Liu is starring in this my hopes are even higher that Paul Sun-Hyung Lee could be in Rangers of the New Republic Disney pls [sic: please]

Sal Scalici shared his full dream cast for Rangers of the New Republic, including Lee as Carson Teva, Ashley Eckstein (the original voice of Ahsoka Tano in animated series Star Wars: The Clone Wars) as his own original character Ashla Alpha, Vanessa Marshall (the voice of Sydulla in Star Wars Rebels) as Hera Syndulla, Karen Fukuhara as Doctor Chelli Aphra, and Dave Filoni reprising his Mandalorian role as Trapper Wolf.

Another social media user, Andy, is hoping that the Star Wars galaxy sees what they’re missing if they don’t bring Lee back to reprise his Mandalorian role:

Paul Sun-Hyung Lee is so…talented. Another project is going to nab him (Folded hands Rangers of the New Republic) and be lucky for it. I’ll be happy to watch whatever is next but man…. It’s going to be a long time before I get over the fact that Kim’s is done & that made Appa cry.

Paul Sun-Hyung Lee is so damn talented. Another project is going to nab him (? Rangers of the New Republic) and be lucky for it. I'll be happy to watch whatever is next but man…. It's going to be a long time before I get over the fact that Kim's is done & that made Appa cry. https://t.co/Au4Nby9qqQ

With Pedro Pascal confirmed to return as bounty hunter Din Djarin in The Mandalorian Season 3 and Rosario Dawson coming back as Jedi Ahsoka Tano to search for Grand Admiral Thrawn and Ezra Bridger in Ahsoka, there is certainly room for the Star Wars universe to continue to expand with fan-favorite minor characters like Teva.

Clearly, the Star Wars fan base wants more than a couple of episodes featuring Lee as Mandalorian creators Jon Favreau and Dave Filoni continue their work in the “Mando-Verse”.

At this time, we don’t know many specifics about how the third season of The Mandalorian, Ahsoka, and Rangers of the New Republic will interconnect with one another.

However, it seems likely that the unfinished Darksaber story arc involving Bo-Katan Kryze (Katee Sackhoff) will continue to be part of this ongoing Star Wars story. Currently, Djarin wields the ancient Mandalorian weapon — but Kryze still wants it to reclaim leadership on her home world of Mandalore.

Furthermore, The Book of Boba Fett, premiering in December 2021, has been described by showrunner Jon Favreau as The Mandalorian‘s “next chapter”.

Do you want Paul Sun-Hyung Lee’s Rebel pilot to have a larger role in Star Wars moving forward?