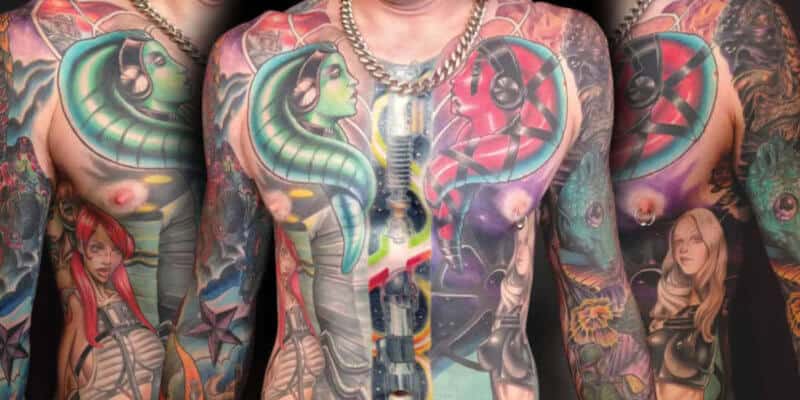 When people love a fandom — whether it’s a specific Marvel super hero, Lord of the Rings, Doctor Who, Star Wars, or something else — they often choose to wear clothes and accessories that reflect their passion. Some fans, though, take things ever further and opt to get tattoos that represent their favorite franchises.

As it turns out, Star Wars fans are (perhaps unsurprisingly) the most over-the-top of all fans, with George Lucas’s galaxy far, far away being the most tattooed movie franchise in the world.

Related: Minimalist Disney Tattoos That Will Have You Craving Fresh Ink

Tattoos even play a role in the Star Wars universe. Wookieepedia notes:

Tattoos were markings that covered parts of certain sentient lifeforms’ bodies. Male Dathomirians, the Nightbrothers, such as the Sith Lord Darth Maul [above], had natural striping that they embellished with tattoos. Female Dathomirians, the Nightsisters, had more subtle tattoos that were in contrast to their pale skin. Likewise, the Jedi hunter known as the Grand Inquisitor had red tattoos on his face. Naley Frifa, an outlaw tech on Vandor, was also a tattoo artist who was proficient in inking electro-tattoos, a type of tattoo which could carry data, as well as more mundane tattoos like gang symbols. Frifa herself had numerous tattoos, including a stylized depiction of a hyperspace simu-tunnel on her neck and upper torso, and one on her left arm of the word “Hiro.” The human Chelli Lona Aphra had electro-tattoos [below].

Fan site Jedi News reported the following statistic, leading them to believe that Star Wars truly is the most tattooed film franchise in Hollywood history:

…according to recent data analysing hashtags on Instagram, almost 322,000 people have a Star Wars tattoo, making it the most tattooed movie franchise ever!

Here, we take a look at some super cool Star Wars tattoos that will have you wanting fresh ink as soon as possible!

Jolie Rouge Tattoo shared this incredible Boba Fett tattoo with Slave I in the background:

“He’s no good to me dead” – Boba Fett by @mattdifa

Get in touch with your ideas and for bookings at jolierougetattoo@gmail.com

If you’ve always wanted to join the dark side, you’ll be obsessed with this intricate Darth Vader tattoo by Adam Hamilton Tattoos that features the Sith Lord in bright red:

Tattoos By Jamie Hawkes shared a photo of a super-feminine Rebel Alliance symbol tattoo with a rose inside. Who says you can’t love Star Wars and be a girly-girl?

This minimalist Star Wars tattoo features some of the most famous ships from the Star Wars galaxy, including an Imperial TIE fighter and, of course, Han Solo and Chewbacca’s Millennium Falcon:

I’m one with the Force. The force is with me.

This adorable tattoo of Princess Leia and R2-D2 (holding a Death Star balloon) is a unique take on two iconic original trilogy characters. The English translation of the Spanish caption reads:

A tattoo with feeling, the signature below putting a finishing touch

Shane Watkins shared his incredible Battle of Yavin tattoo and noted that it took approximately 16 hours to complete the detailed chest piece:

Last session done ! Now to let heal! Thanx so much Andy your did great 4hrs a week for 4 weeks

Made this fun little Ashoka Tano Lego tattoo on @shortymama1000 today at @redtreetattoo ! This is one of the smaller tattoos I’ve done in a while and it was a blast! Can’t wait to add more Lego tattoos soon!

Miss Satine Lemans showcased her Star Wars sleeve in a pin-up style photo with the caption “Pin me up!” Her full-sleeve tattoo features a number of Star Wars icons, including Darth Vader, a stormtrooper, Jawas, R2-D2, and Grand Master Yoda.

Mandalorian tattoos have, of course, skyrocketed in popularity ever since the hit Jon Favreau and Dave Filoni series debuted on Disney+ in December 2019. Bella Emporio shared this picture of a Grogu tattoo featuring popular character “Baby Yoda” in his famous pod stroller:

Neddy Noo Tattoo shared another piece of Grogu ink, this time showcasing the tiny foundling with his now-iconic blue macarons from The Mandalorian Season 2:

Baby Yoda with his little macaroons for @caprice_rose today . Thanks for giving this cutie a home .

No matter what your opinion of the Star Wars sequel trilogy is, this Sailor Jerry-inspired Poe Dameron tattoo is sure to catch your attention. Hive Tattoo Vegas wrote:

Finally, it doesn’t get much more iconic than a Han Solo and Princess Leia couple tattoo. Natalie Jane showed off matching black and grey “I love you”, “I know” pieces with the caption:

I have been with the love of my life for almost 6 years now.

Wedding planning already happening and saving as fast as we can to buy our dream home.

So on the weekend we cpudont [sic: couldn’t] help but celebrate our love with a Star Wars Tattoo.
Han and Leia inspired tattoos.

If you want to learn more about Star Wars tattoos, check out the book “The Force in the Flesh” by Shane Turgeon. Turgeon has dozens of Star Wars tattoos and has even done an extensive interview you can check out on StarWars.com! When asked exactly how many pieces of colorful Star Wars ink he has, Turgeon replied:

Oh jeez! That’s a hard one! My whole lower left leg is dedicated to The Empire Strikes Back, I have a vintage Power Droid action figure on the top of my left foot, a mini-Tusken Raider portrait and some other bits of Aurebesh here and there.

Whether you’re an original trilogy fan who loves Luke Skywalker, Princess Leia, Han Solo, and Chewbacca, a sequel trilogy aficionado with a penchant for Kylo Ren, or you just joined the Star Wars fandom when bounty hunter Din Djarin came on the scene in 2019, there’s a Star Wars tattoo for you.

Do you have a Star Wars tattoo?