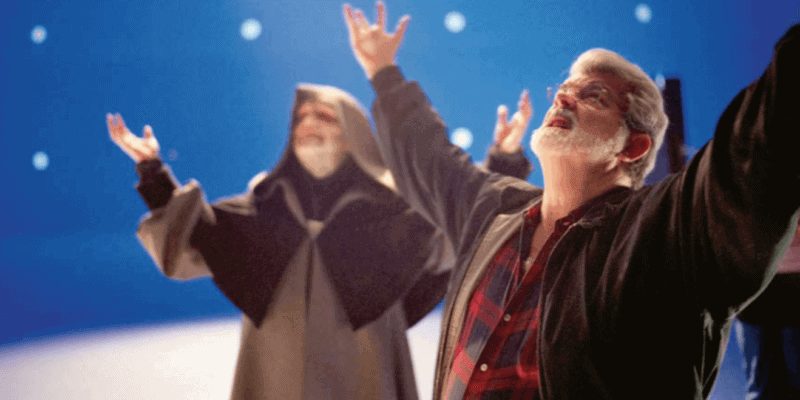 Never mind the crossovers on-screen, the corporations under Disney’s entertainment banner are sharing the talent too. Kevin Feige has proved his worth ten times over during his immense run as President of Marvel Studios, navigating the movie studio to glittering heights. Sometime in the future, the Marvel icon will join forces with Lucasfilm President Kathleen Kennedy to produce a new Star Wars project.

Alongside Feige is Hollywood hotshot, Michael Waldron, who is tapped to pen the script. While this is all very exciting, a recent theory has suggested this specific team-up might be creative enough to bring back a George Lucas long-lost fantasy. Put your lightsaber on safety and grab a macaron because this could be a little bit wild.

Let’s first give a little bit of context — Kevin Feige and Kathleen Kennedy first announced they were joining forces for an upcoming Star Wars project in 2019 with Michael Waldron being attached at the start of this year. Feige, as we know, kicked off the Marvel Cinematic Universe and made the franchise one of the most beloved entities on the globe. Feige is the Marvel king.

Kennedy saw Lucasfilm’s and Star Wars‘ transition into The Walt Disney Company, launching its first movies since George Lucas and paving the way for original streaming content on Disney+ like The Mandalorian, and the soon-to-be, Andor, Ahsoka and The Book of Boba Fett. At present, the only other confirmed Star Wars film is Patty Jenkins’ Rogue Squadron. Although, Taika Waititi and The Last Jedi‘s Rian Johnson are attached to untitled upcoming projects in the Star Wars universe.

Waldron doesn’t have such a lofty position (yet) but his recent credits are indeed blockbuster-worthy. The writer is at the helm of the Disney+ series, Loki — which we now know is Disney’s biggest opening on the popular streamer to date — and is writing the script to the highly anticipated Doctor Strange in the Multiverse of Madness (2022). The Doctor Strange sequel sees the return of Benedict Cumberbatch in the title role, and Elizabeth Olsen’s Avenger, Wanda Maximoff (AKA Scarlet Witch).

Not much has been shared yet about the Feige-produced Star Wars film but in a recent interview with GQ, Waldron teased that it will hark back to core elements of the epic space opera.

“And I think Star Wars, at its best, is a story about family. Han, Luke, and Leia were a family; you love seeing them together, and you hated it when they were split apart. It’s great characters. That’s nothing new. I am not going to blow anybody’s mind with that headline—but that’s my biggest takeaway.”

George Lucas once said that despite its grandeur and its science-fiction composition, the Star Wars saga is first and foremost a “soap opera”. Darth Vader did declare his parental status after chopping off his son’s (Luke Skywalker) hand on a planet made of clouds, so it seems fine to call it that.

That being said, with Waldron already wrapped up on Loki as the head writer — which is doing all sorts of weird with the MCU timeline — and leading the Doctor Strange sequel, it stands to reason that the Star Wars film he and the Marvel Boss create could also play with the very core of the franchise. Feige’s Star Wars project could bring Marvel’s incomparable storytelling to Lucas’s galaxy.

A recent theory plays on the idea that a Time Variance Authority (TVA) — the organization that keeps track of the Sacred Timeline in the MCU — style event would not only be weird enough to inject something fresh into the Star Wars saga but could also potentially erase certain events that already exist. Inverse points out:

In an early George Lucas draft of Star Wars, the entire narrative would have been folded into something called “The Journal of the Whills.” This would have been a narrative device in which beings from another plane of existence would have had a different point of view on Star Wars.

Lucas actually spoke on the Whills in a 1998 book called Star Wars: The Annotated Screenplays. The director said:

“Originally, I was trying to have the story be told by somebody else (an immortal being known as a Whill); there was somebody watching this whole story and recording it, somebody probably wiser than the mortal players in the actual events. I eventually dropped this idea, and the concepts behind the Whills turned into the Force. But the Whills became part of this massive amount of notes, quotes, background information that I used for the scripts; the stories were actually taken from the Journal of the Whills.”

There have been a handful of mentions of the Whills before, namely in Rogue One: A Star Wars Story (2016). The character Chirrut Îmwe was identified as a Guardian of the Whills, but the theory notes that it is the term’s cautious sprinkling throughout the Star Wars canon that could open it up to be explored:

…it’s right in this grey era where a Michael Waldron Star Wars movie could exist. The Whills are outside of the Force but they’re also inside of it, much like the TVA. At the same time, the vague purpose and power of the Whills make them similar to the off-screen Time Keepers in Loki.

The theory is summed up by commenting on how Waldron is dealing with the MCU’s biggest element.

The larger point is, if Waldron is doing a Star Wars movie, the whole setting of the story could be flipped inside out. In Loki, what we thought we know about the MCU is getting subtly — and not-so-subtly — amended.

So, while this seems out there, strange things literally have happened. When looking at this type of theory through the lens of, let’s say, Marvel, it seems completely plausible because the MCU has proven it can successfully handle these big concepts. The Star Wars saga has a less confident track record — even JJ Abrams claimed there should’ve been a plan for the Star Wars sequel trilogy to give the Skywalker Saga a more satisfying conclusion.

The theory of introducing something bigger than the Force, or at least playing with some unusual unknowns could be how Feige cracks the franchise wide open.

What do you make of this theory? Let us know in the comments!