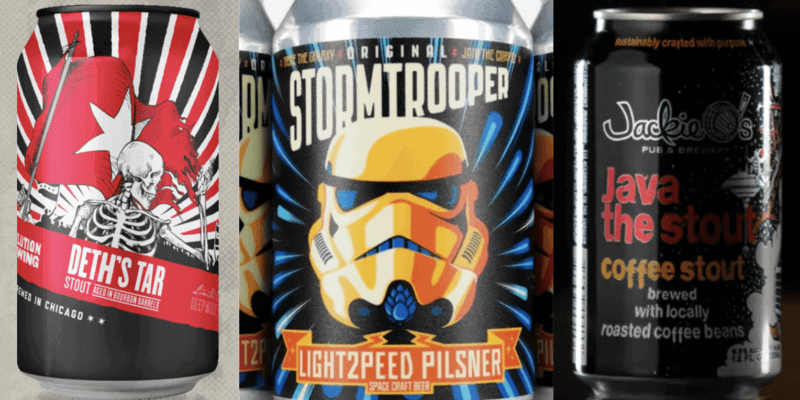 If you’ve ever dreamed of stopping by the Mos Eisley cantina and having a beer with Han Solo, or if you’re not able to visit Oga’s Cantina for a Fuzzy Tauntaun, you’re in the right place.

Beer existed in a galaxy far, far away and, in fact, was deadly for a particular species on Tatooine to consume. Wookieepedia explains:

There were many types of beer available throughout the galaxy. A distinction was made between beer (which included fortified beers, lagers and ciders) and stronger alcoholic beverages (like wine and liquor), which were referred to as spirits. The beverage had an unusual effect on Jawas, who would shrivel up like a slug if they consumed beer.

Whether or not you knew this information before you opened this guide, it turns out there are a lot of Star Wars beers on tap around the United States and the world.

Here, we’ve rounded up the best Star Wars-themed beers for everyone — except your Jawa friends — whether your tastes run to the light side or the dark side.

Inspired by the Millennium Falcon’s hyperdrive (but significantly more functional), this seasonal beverage is officially described as:

Its bitterness flies under the radar as hops create hits of lemon and orange aromas. Double Dry Hop Light Speed is a medium-bodied pale ale that is out of this world.

This beer, formerly known as Jedi Juice, once featured an image of Princess Leia Organa holding her blaster. Now, the beverage has been updated, but still packs the same punch. The official description reads:

One of our most popular and award-winning beers Jedi Juice has had a haircut!

The same hazy goodness you know and love, with a slightly new look.

Hazy, juicy and with a citrusy hop aroma – finishing off with intense flavour and a great mouthfeel. Featuring Riwaka, Nelson Sauvin, Citra and Mosaic hops – this beer will bring out the Jedi in everyone. Unfined and unfiltered, the J JUICE pours quite hazy in the glass with a bright orange colour.

Related: Who Is Lando Calrissian?

Here’s to the lone wolves, the misfits, the outsiders—those who prefer to stand on their own. Hop Solo IPA is brewed start to finish with only Crystal hops, allowing their spicy, woodsy, one-of-a-kind character to shine through.

Based in the United Kingdom, The Original Stormtrooper Beer offers numerous Star Wars-themed beer options. This particular pilsner is officially described as:

A classic refreshing lager with a twist. A subtle maltiness with hints of grass and corn is balanced by a gentle bitterness, alongside citrus, resin and stone fruit hop aromas from specially imported US hops.

The official description of this dark lager inspired by Darth Maul reads:

Darth Malt Legs is a roasty, malty and satisfying dark lager. If you’ve never had a Schwarzbier before, you owe it to yourself to give this a try. You won’t be disappointed if you like German style beers. With a 4.8 % ABV, this is a perfect sessionable dark lager.

The official description of this Star Wars beer that was inspired by the dark side of the Force — yet packs a semi-sweet punch (think Ben Solo post-redemption arc) — reads:

An infusion of old-world beer and contemporary soul. Smooth, dark and roasted with highlights of chocolate, coffee and vanilla. Pair with beef, Indian or Asian cuisine and chocolate or vanilla desserts.

This ode to the famous Hutt crime lord is a seasonal brew that you can enjoy when the weather turns chilly annually. The official description reads:

A caramel centered Stout accentuated by Ridge Runner coffee. Instead of simply adding coffee to a stout, we build a stout around the coffee. Course ground coffee beans are added in the conditioning tank. The beans add a robust roasted character and turn this Stout fully opaque. Our best selling seasonal since 2008!

With a name influenced by the Death Star, this porter from Kentucky’s Bluegrass Brewing Co. won’t disappoint. The official description reads:

A rich and robust blend of light, caramel, and dark malts sets the stage for BBC Dark Star Porter’s robust presence on the palate. This smooth but robust porter has complex notes of chocolate and roasted grains balanced by additions of traditional English hops, creating a delicious chocolaty and smooth ale.

Another Death Star-inspired beer, the darker-than-dark Deth’s Tar is perfect for anyone who relates more to the Empire than the Jedi Order. The official description of the annual, limited-release beer reads:

Witness the firepower of this fully operational Barrel-Aged Imperial Oatmeal Stout. Brewed with English specialty malts and the addition of flaked and malted oats to create a rich, chocolaty profile and silky mouthfeel that cloaks its considerable strength. The American oak barrels continue to build layers of complexity, reminiscent of vanilla, toasted coconut and caramel candy after aging this dark menace a full 12 months.

B. Nektar Meadery (Ferndale, MI) – Episode 13: B. Nektar Strikes Back

With a logo featuring a bourbon barrel AT-AT unit, B. Nektar’s Star Wars mead is so unique, it’s like taking a trip to the Outer Rim. The official description reads:

Gluten-Free – Our barrel-aged products are technically gluten-free. Studies show that distilled products that were formerly in the barrel do not contain gluten but some argue that they are still affected by it.

Which of these Star Wars beers are you most excited to try first, whether you’re celebrating Star Wars Day or just having a Skywalker Saga movie marathon?

Comments Off on The Ultimate ‘Star Wars’ Beer Guide