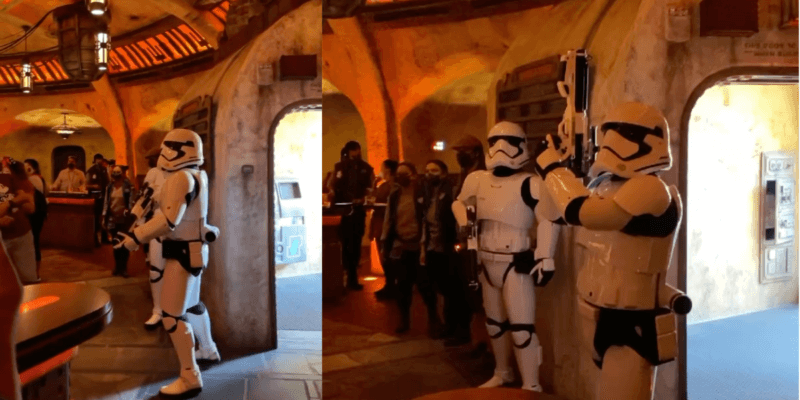 The Disneyland Resort has officially reopened and is welcoming back visitors from across the globe. Along with new experiences coming to the parks, Guests spotted an incredibly rare moment at Star Wars: Galaxy’s Edge — and it concerned two stormtroopers.

Stormtroopers at a Disney Park are always a hot topic, as they can be very sassy while enforcing the First Order’s laws.

KT, Disney influencer and co-owner of Best Life & Beyond on YouTube caught a rare sight of two stormtroopers coming into Oga Cantina during a soft opening of the bar:

Storm Troopers Came into Ogas Cantina at Disneyland for the soft opening..

Related: Fireworks Are Returning to Disneyland!

In the past, stormtroopers never dared walk into the packed Oga’s Cantina, let alone even wander around that area of Batuu. Rather, they’re commonly seen in front of Kylo Ren’s TIE transport or near Han Solo’s Millennium Falcon.

These stormtroopers, however, smoothly strolled into Oga’s with a Cast Member and stole the show.

Wonders of Magic on Instagram also caught this magical moment on video:

The first order in Ogas Cantina!!

In both videos, the two First Order stormtroopers hilariously interact with Oga as she seems to yell at the two and assumingly tells them to leave her bar.

Responding in their usual, business-only manner, these two troopers give a confused look at one another and promptly tell Oga that the First Order will be watching her operations.

In the past, they’ve stopped young Jedi with their new lightsabers from Savi’s Workshop or even super enthused dads that are massive Star Wars fans, but stormtroopers actually coming into Oga Cantina at Disneyland is jaw-dropping!

Tomorrowland near Space Mountain used to be the stomping grounds for imperial troopers. But, with the Happiest Place on Earth constantly expanding, we see new character interactions that can make your trip a whole lot more magical!

Among the highlights of Star Wars: Galaxy’s Edge at the Disneyland Resort and Walt Disney World Resort is Kylo Ren and his team of stormtroopers surveying the Black Spire Outpost and the surrounding area.

Oga’s Cantina is currently in its soft opening phase as of June 15, coinciding with Disneyland’s new mask policy and out-of-state visitors being able to visit the popular Southern California Disney theme park once more.

While other Disney characters walk around the famous Orange County theme park in Fantasyland and Disney California Adventure theme park during the resort’s reopening, it’s a treat to see these stormtroopers in a new light.

Disney has confirmed that Galaxy’s Edge will continue to grow with new experiences over the coming years in phases. Hopefully, this stormtrooper interaction at Oga’s Cantina will become the norm!

What do you think? Would you have loved to see this?

Do you plan to visit Disneyland soon? Click here to book a trip and share your travel plans with us in the comments!