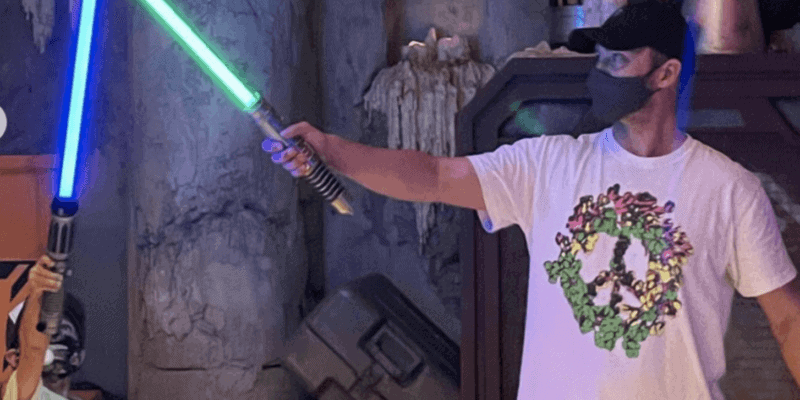 I don’t know who was freaking out more… me or my six year old This was the coolest. Big thank you to @waltdisneyworld for an amazing trip.

The Force is strong with this family! Glad you had fun!

The William Rast clothing designer also took to his Instagram Stories to share a photo of him and Silas building lightsabers at Savi’s Handbuilt Lightsabers, one of the most popular experiences Galaxy’s Edge has to offer to Star Wars fans.

Here — and at the Droid Depot — Guests can build their very own pieces of Star Wars memorabilia, either a working lightsaber or a functional Astromech droid unit, respectively. The Timberlake family seemed to have a friendly competition while constructing their lightsabers, as Justin captioned his photo:

When your six year old assembles his light saber [sic:lightsaber] twice as fast as you.

Related: Rise of the Resistance Boarding Groups Fill Up in SECONDS on Reopening Day

Timberlake’s posts about his day at Disney World’s Star Wars land focused on Savi’s, but presumably, he and his son also enjoyed all of the other things Batuu has to offer, including Millennium Falcon – Smugglers Run and Star Wars: Rise of the Resistance.

They may have even had a chance to enjoy a Ronto Roaster or some blue milk, just like legendary NFL quarterback Tom Brady recently did.

It doesn’t appear that Timberlake’s wife, actress Jessica Biel, or the couple’s younger son, Phineas (born in July 2020), were on today’s trip. Biel currently has no projects in the works according to IMDb, perhaps focusing on her young family.

As for Timberlake, the entertainer teased earlier this year that he may have a new solo album in the works.

What do you think about these rare photos of Justin Timberlake and Jessica Biel’s oldest son at Disney World?

Ready to visit the magic? Let the expert team at Academy Travel help you plan every detail of your next trip to any of Walt Disney World Resort’s four theme parks — Magic Kingdom, EPCOT, Disney’s Hollywood Studios, and Disney’s Animal Kingdom. They can even help you snag a coveted reservation at Oga’s Cantina at Galaxy’s Edge!

Comments Off on Justin Timberlake Is “Freaking Out” Over ‘Star Wars’: Galaxy’s Edge!