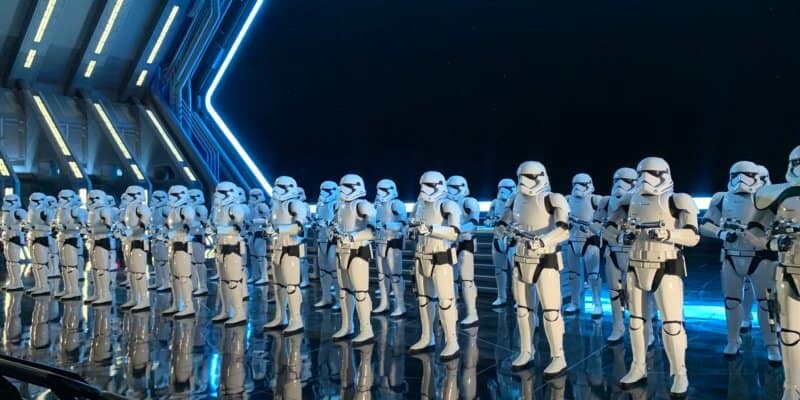 Disneyland has finally opened up after being closed for a record-setting 400+ days! And while most were thrilled just to be back at the Happiest Place on Earth, many were thrilled for another reason: the chance to ride Rise of the Resistance, the newest ride in Star Wars: Galaxy’s Edge.

The attraction opened in January 2020 but had to close just a couple of months later when the theme parks shut down because of the pandemic.

To accommodate Guests for Disneyland’s grand reopening, the Mickey & Friends and Pixar parking lots opened at 6 a.m. Guests then lined up at socially safe distances before the theme park opened. Although the park was not open, Guests were able to try to get a Rise of the Resistance Boarding Group starting at 7 a.m.

When boarding passes opened up, they quickly filled up. Below is a breakdown of events.

Still, even when Boarding Groups were filled, nobody was inside the Disneyland theme park gates.

For comparison, here is the timeline for Rise of the Resistance Boarding Groups when the ride officially opened in January 2020.

Luckily for Guests who were not able to get Boarding Group for Rise of the Resistance in the first round of distribution in the morning at 7 a.m., they will have another opportunity in the afternoon. At 12 p.m. Guests are able to once again try to get into the ride virtual queue. This second registration for the Rise virtual queue is to account for the Guests who will be park hopping over to Disneyland.

Due to current capacity restrictions, Guests who have a Park Hopper ticket can only begin to go to their second theme park beginning at 1 p.m. During the reservation process, Guests picked which theme park where they wanted to begin their day. They then must begin their day at the selected theme park and can head over to the second park in the afternoon.

Guests who purchase or have a Park Hopper ticket and an appropriate park reservation may visit the second park on the same day beginning at 1 PM. Please check the Park Hours calendar and the Disneyland app for the most up-to-date Park Hopper hours, as they could start earlier at a later date, depending on the day and park. Guests with Park Hopper tickets must make a park reservation for the first park they plan to visit AND enter that first park prior to visiting the other park. At this time, a park reservation is not required after the first park, however, reservation requirements are subject to change. Please note that the ability to visit the other park will be subject to that park’s capacity limitations.

Were you able to get your Boarding Group for Rise of the Resistance at Disneyland’s reopening? Let us know in the comments!