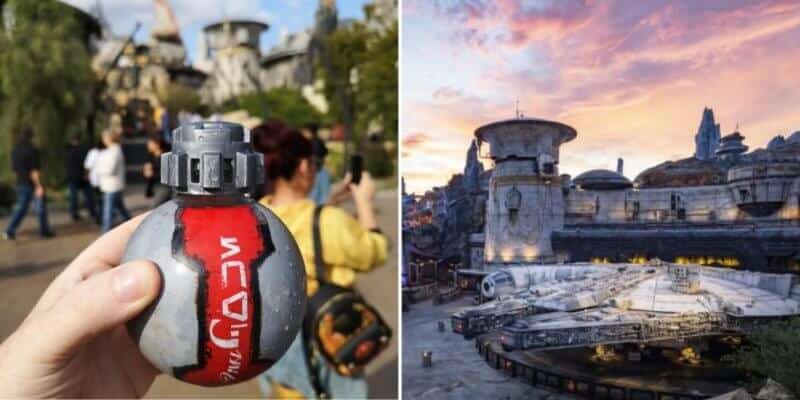 As a Star Wars fan, I couldn’t wait to get my hands on the sphere-shaped Coke bottle collectible from Star Wars: Galaxy’s Edge at Disney World and Disneyland. From the moment I saw this souvenir, I knew I needed to add it to my Star Wars shelf, but I was a bit concerned after the TSA banned the detonator-inspired item from luggage. However, once the TSA gave the go-ahead to these plastic Coca-Cola bottles, I made some room in my bag!

I was lucky enough to purchase one of these thermal detonator Coke bottles right before the pandemic hit, but now they have apparently disappeared from Disney Parks! You can watch a video about the release of the bottles below:

Per local Southern California news source The Orange County Register, there have been no sightings of this popular Star Wars collectible in Galaxy’s Edge lately. Since the reopening of Disneyland Park last month, classic drinks such as Coke, Diet Coke, and Sprite that came inside the thermal detonator-themed bottles have been out of sight.

Now, Disney Guests have been purchasing regular run-of-the-mill Coke bottles in the Parks and are wondering if a shortage has occurred, or have the bounty hunters and stormtroopers collected all of these weapons for themselves?

Well, as it turns out, Disney has confirmed that they are, indeed, temporarily unavailable. According to OC Register,

The Coca-Cola orb bottles are temporarily unavailable and expected to return to Star Wars: Galaxy’s Edge in the future, according to Disneyland officials.

According to OC Register, if you’re in the Orlando area, or if you’re planning a Walt Disney World trip soon, you can rest assured that you will find these Coca-Cola collectibles inside Galaxy’s Edge at Disney’s Hollywood Studios. We suggest you head to Black Spire Outpost and prepare to spend your hard-earned $6 for this one-a-kind Star Wars souvenir.

These palm-sized thermal grenade-shaped bottles were also spotted in a place Disney fans would never think to look. With a label written in Aurebesh, a common alien tongue found in the Star Wars universe, these famous Galaxy’s Edge bottles were actually once found in the middle of a supermarket!

Here is the stack of them sitting in the store pic.twitter.com/lIZ6zX5P2i

Presumably, Disney didn’t want the beverages to go bad during their theme parks’ COVID-19 closure, so they seemingly shipped the Battuan drinks to grocery stores.

These Coca-Cola handheld “detonators” were designed by Disney Imagineers and Lucasfilm and have been a staple drink — alongside blue milk and green milk — at both Disneyland and Walt Disney World’s Galaxy Edge Star Wars lands.

If you are planning to visit Galaxy’s Edge soon in Disneyland Park, it is best to ask a Cast Member for information regarding the return of these special Coke collectibles or keep your eyes peeled around Black Spire Outpost so you can purchase one as soon as they become available again.

Were you able to purchase this Coke collectible? Let us know in the comments below!

Let Academy Travel help you plan your next Star Wars adventure inside Galaxy’s Edge! These professionals are Earmarked Diamond! Click this link for more information!