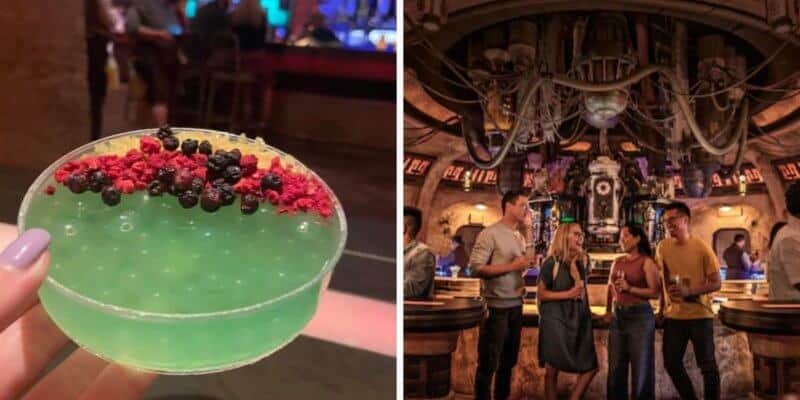 Oga’s Cantina is the local watering hole in the Star Wars films and in both Star Wars-themed lands — Star Wars: Galaxy’s Edge — in Disneyland and Disney World.

Oga Garra, the owner of Oga’s Cantina, is also a local crime boss who controls the underworld within the Black Spire Outpost village. Per the elaborate Galaxy’s Edge backstory, Oga’s Cantina is located on the Star Wars planet of Batuu, which is where Guests “land” the moment they step through the Galaxy’s Edge gates.

The cantina offers unique concoctions such as the Fuzzy Tauntaun, The Jedi Mind Trick, and the Bespin Fizz, all of which are fan favorites, making Guests feel as though they are actually visiting a galaxy far, far away. But, there is one offering on the menu that is very similar to a Jell-O shot!

Under the provision with alcohol section of the menu, you will see the Rodian Ration, which Disney describes as Tito’s Handmade Vodka, Dekuyper Pucker Sour Apple, Green Apple, Sprite, and Boba Balls with a Pop.

On my recent visit, I decided to be adventurous and try it out! When the Cast Member brought it over to me, she described it as “a very unique Jell-O shot”, which I found extremely interesting. I gave it a try and I was very impressed!

You can see in the photo below the Rodian Ration has a Jell-O-like texture and it is clearly filled with those iconic Boba Balls! Overall, it was very flavorful, but the texture is something you will either love or hate.

For those of you who are not yet 21 years of age or prefer to not drink alcohol, there is a provision without alcohol as well called Oga’s Obsession, which Disney describes as Minute Maid® Premium Lemonade, Cotton Candy Flavor, Blueberry Popping Pearls with a Bursting Dried Fruit Mixture.

Have you ever ordered the Rodian Ration? What did you think? Let us know in the comments below.

Do you want to visit Oga’s Cantina on your next Disney vacation? Let our friends at Academy Travel help you plan! Get started with a free quote today.

Comments Off on Did You Know Disney Sells a Unique “Jello-O Shot”?