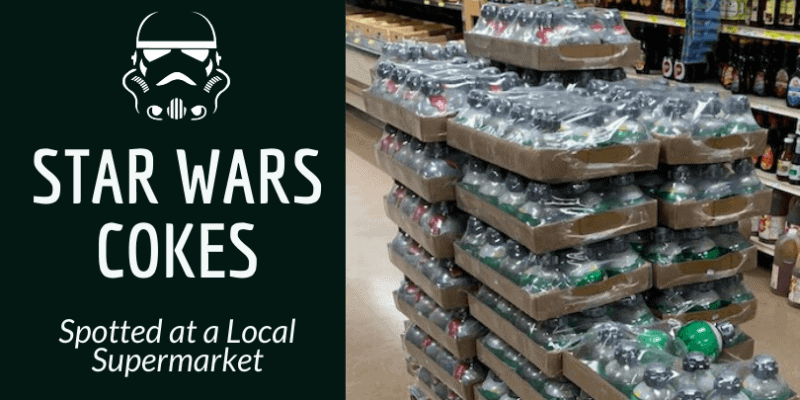 Anyone checked the lost and found lately? Twitter user @escapedstitch happened to be shopping in their hometown of Hartford, Alabama, and found quite a treasure in the middle of the Tate’s Supermarket aisle. None other than Star Wars Coke Bottles, Sprite Bottles, and other thermal detonator-styled drinks. Going for only $6.99 for a 12 pack, the Twitter user scooped up several flats for his outer worldly refreshment.

The Coca-Cola Company had designed several soft drink products for the sale in the Star Wars: Galaxy’s Edge land at Walt Disney World Resort and Disneyland Resort. The Cokes and Sprites (as well as remodeled Dasani water) were supposed to be exclusive to the land causing many Park-goers to attempt bringing them home via airplanes and packed suitcases. But the last thing we expected was to find them in the middle of the grocery store!!

Here’s the tweet from @escapedstitch that caused quite a ruckus among Star Wars fans and Parks fans alike. We can’t blame them for wanting to know every detail possible about this “exclusive” item showing up so casually. And in Alabama, no less, which is at least 1 parsec from Orlando.

Here is the stack of them sitting in the store pic.twitter.com/lIZ6zX5P2i

Later, more details were divulged about which store, at what price, and how @escapedStitch found the Star Wars Coke and Sprite Thermal Detonators. After scrolling the thread, you can read that instead of the typical $6-7 per bottle, the entire flats of a dozen beverages were being sold for $6.99. Users supposed that even though sealed tightly, the bottles would “expire” before they could be successfully sold at a Park, and Coca-Cola was ready to unload their cargo.

The Coca-Cola products originally came in exclusive, unique packaging complete with Aurebesh writing (common alien written-language found in the Star Wars Universe). The bottles were extremely novel, not appearing with typical trademark images, but styled in an obvious way to be Coke, Sprite and Diet Coke. Even the Dasani water bottles were transformed for the flight to Black Spire Outpost.

There was a bit of sticker shock when each “thermal detonator” was priced at $6-7 per bottle. Theme Park beverages are always marked up, of course, but the shape concerned some Park lovers as being smaller than a typical coca-cola bottle elsewhere at Walt Disney World Resort or Disneyland Resort; would there be a volume difference?). Without having done much research on the volume, I can tell you that it was mighty tasty and most certainly resembled the famous Thermal Detonators in Star Wars they were modeled after. Take a look below at the advertisement by Coca-Cola themselves.

Would you make a special drive to the Grocery Store for a Star Wars Coke or Sprite? Leave us a comment below!