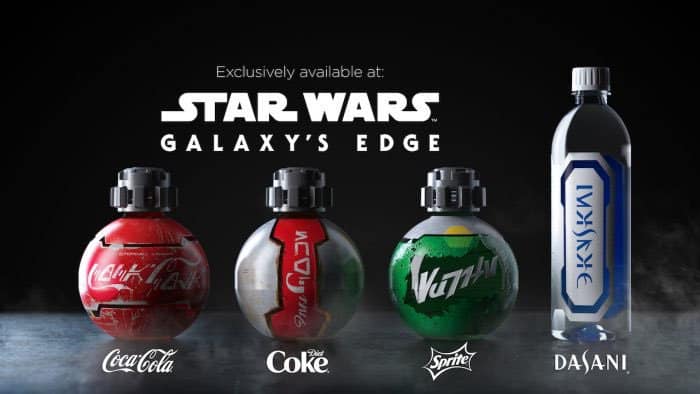 Last week, we learned that the Transportation Security Administration (TSA) had made a decision to ban Star Wars: Galaxy’s Edge Coke bottles from carry-on and checked luggage. But now, it seems the TSA has changed its mind.

A few weeks ago, a Twitter user asked the TSA if they were allowed to bring the “Star Wars” themed Coke bottles aboard the aircraft as they could look slightly suspicious.

Thanks for asking! Replica and inert explosives aren't allowed in either carry-on or checked bags.

It’s safe to say many fans were completely outraged by the news that after visiting the new Star Wars themed-land at Disney’s Hollywood Studios at Walt Disney World, they wouldn’t be able to take home one of the brand new souvenirs from Galaxy’s Edge.

Part of what angered guests was the fact that fans have already became obsessed with these plastic Coke bottles before Galaxy’s Edge opened in Florida, as they were available to guests over at Galaxy’s Edge at Disneyland in California since the land opened back in May.

Many have collected these Coke bottles and have brought them home from the park as souvenirs.  have Some simply just put them on display in their homes, but others got a bit more creative and turned them into Christmas Tree ornaments. So if guests were able to bring them home from California for months, why are they all of a sudden banned now that Galaxy’s Edge has opened in Florida?

A few days ago we heard news that the TSA may be reconsidering their decision because of the backlash, although they didn’t confirm nor deny…until now.

Now, we’ve learned that the TSA had issued a new statement: “We have completed our review, and instructed our officers to treat these as an oversized liquid.”

We are relieved to hear of this news so we, too, can bring home the highly anticipated “Star Wars” themed Coke bottles and bring Galaxy’s Edge into the comfort of our homes.

Do you plan on visiting Galaxy’s Edge at either Walt Disney World or Disneyland and need help planning your perfect trip? Then don’t hesitate to reach out to the Authorized Disney Vacation Planners at Academy Travel for a free quote and help planning the vacation of your dreams.

Are you excited to see TSA uplift the ban on these “Star Wars” themed Coke bottles?