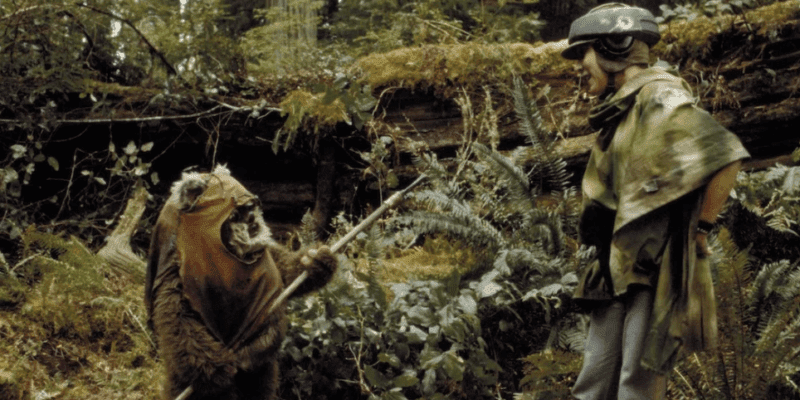 Star Wars legend, Mark Hamill, is best known for his four decades as Jedi Knight Luke Skywalker in George Lucas’s aptly named Skywalker Saga. Over the years, the actor has become an icon within the Star Wars fan community, spending time with children who are undergoing treatment for various illnesses and surprising healthcare heroes throughout the COVID-19 pandemic.

Now, the actor has weighed in on a very important question — were the Ewoks actually vicious murderers? New York Times bestseller author, Brad Meltzer, shared a Sesame Street meme that posed the question:

In Return of the Jedi, how could the Ewoks have a dress that fit Leia…unless they cooked and ate a woman her size?

I’m trying NOT to think about it.

Yikes. Us, too, Mark. And, lest we forget, there is a precedent here. Poor Han.

While this question may never actually be answered in Star Wars canon, Disney+ subscribers can now watch the furry inhabitants of the Forest Moon of Endor in the 1980s Ewoks animated series and both little-known Ewok movies — Caravan of Courage (1984) and Ewoks: The Battle For Endor (1985).

The final trilogy in the Skywalker Saga saw the introduction of Luke’s nephew, Kylo Ren/Ben Solo (Adam Driver), who could continue to play a role as the Star Wars universe moves forward. Hamill shocked fans when he appeared as CGI version of Jedi Knight Skywalker in The Mandalorian Season 2 finale, taking Grogu (AKA “Baby Yoda”) from Din Djarin (Pedro Pascal) to train him in the ways of the Jedi Order.

This has led to rampant rumors that a Sebastian Stan-led Luke Skywalker series could be in the works, potentially featuring young Ben Solo’s destruction of Skywalker’s new Jedi Temple and subsequent descent to the dark side.

Nothing about this series has been confirmed, but both Hamill and Stan have spoken out about the possibility of the younger actor taking on the iconic Star Wars character.

Mandalorian creator Jon Faveau and Dave Filoni currently have four Star Wars shows in the works — The Mandalorian Season 3, Ahsoka, Rangers of the New Republic, The Book of Boba Fett,

For now, all we can do is wait for confirmation about the rumored Skywalker series from Disney and Lucasfilm and, of course, anxiously await the future of the Star Wars franchise, including the return of Darth Vader (Hayden Christensen) and Obi-Wan Kenobi (Ewan McGregor) in Obi-Wan Kenobi and, coming on Star Wars Day, Dave Filoni’s new animated series, The Bad Batch.

What do you think? Were Ewoks vicious murderers?