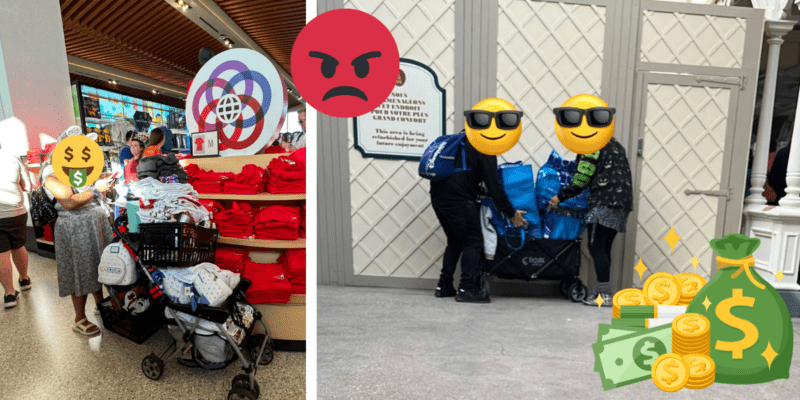 Life hasn’t been easy recently for adult Disney fans. Many so-called “Disney Adults” have been the target of relentless harassment, such as one woman who shared a video of herself hugging Pluto for the first time since the start of the COVID-19 pandemic. Some critics have even called being a Disney Adult a “mental illness,” while others compared it to a religion.

One phenomenon, however, has turned “Disney Adults” on each other: merchandise resellers. Resellers are known to mass-purchase exclusive merchandise, with many viral images of in-store hoarding inciting fury among Disney fans. Some resellers even sell items that were given away for free!

While The Walt Disney Company has attempted to crack down on excessive purchases with buying limits and virtual queues, this doesn’t always work. Many Guests come in pairs, swapping out to purchase the maximum limit of each item repeatedly.

Fans have long asked The Walt Disney Company to crack down on Guests who purchase excess merchandise to sell online at inflated prices. Unfortunately, merchandise hoarders existed even before eBay and will likely never go away. Here, we’ll look at documented incidents of merchandise hoarding worldwide.

Popcorn buckets are some of the most adorable and coveted collectibles at the Disney Parks. This includes an iconic set inspired by the Main Street Electrical Parade, released at Disneyland Park and Disney California Adventure Park earlier this year. Resellers quickly jumped on the adorable treat holders, despite purchasing limits.

Resellers have listed the starting price for the Elliott popcorn bucket as high as $125.00, with many listings being less, and the Turtle Sipper for as high as $180.00. There are also combination packages that include both collectible items. Many of these listings sold, implying a demand for the pricey collectible!

You’ve seen them everywhere – adorable backpacks inspired by your favorite characters from Disney, Marvel, Star Wars, and more. Usually priced at around $80 retail, resellers have jumped on the Loungefly train. A Sleeping Beauty Castle-inspired loungefly, originally released in 2019, recently sold for over $500 and $800:

EPCOT recently celebrated its 40th anniversary, and resellers joined the fun. Many Guests photographed others with carts stacked high and mounds of merchandise waiting to be sold online. From @MagicalNewsLIVE:

Sadly, this is why we can not have nice things. #DisneyWorld #EPCOT #EPCOT40

Sadly, this is why we can not have nice things. #DisneyWorld #EPCOT #EPCOT40 pic.twitter.com/ck4zEpMbSR

While purchase limits were in place, Guests with multiple members in their party can swap out – one guards the goods, and one checks out with the maximum number per Guest. Disney Cast Members might not notice or have time to stop repeat customers on such a busy day.

The Figment Popcorn Bucket saga is perhaps the most infamous incidence of merchandise hoarding, once again at EPCOT. The purple dragon is the most beloved Disney Parks mascot, despite his absence from Magic Kingdom, Disney’s Hollywood Studios, and Disney’s Animal Kingdom.

Starting in January 2022, Guests sold out this adorable bucket with each restock. While no photos of resellers emerged online, eBay listings certainly did. Markups became such a viral meme that fans began listing drawings of the buckets on eBay for hundreds of dollars:

Looking at the Figment Popcorn Bucket scalpers on eBay and found… this. Gotta appreciate the hustle.

Looking at the Figment Popcorn Bucket scalpers on eBay and found… this. Gotta appreciate the hustle. pic.twitter.com/db3TyBu4Td

Disneyland Paris Monopoly listings appeared on eBay within 12 hours, with one seller offering ten copies at $95 each, or 97.31 Euros. Of course, people can list items for any inflated price they want. Disturbingly though, people are buying. One copy of the board game from this seller sold within 24 hours. A search of “sold” Disneyland Paris Monopoly listings on eBay shows at least ten copies sold at prices ranging from $73.88 to $124, plus shipping.

Do we have an answer about their destination?

Tokyo Disneyland and Tokyo DisneySea are famous for some of the cutest Disney Parks merchandise. That makes the Japanese Disney Parks the perfect place for resellers to earn a quick buck!

20th Anniversary Or-kun resale has started. Only people who are full of baskets (translated)

Of course, these incidents are just a few of hundreds documenting resellers’ accumulated items. It’s impossible to say how many incidents haven’t been photographed!

Have you encountered resellers at any Disney Park? Do you think Disney needs to crack down?