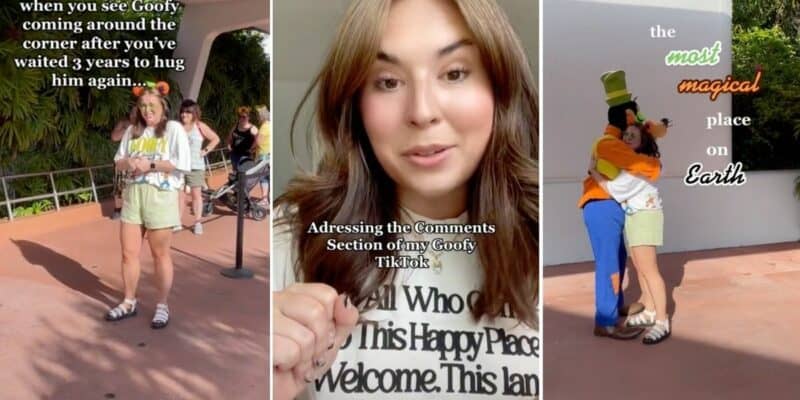 The Disney fan who went viral for her emotional interaction with Goofy at Walt Disney World Resort has clapped back at those hateful comments she received on her video viewed almost 2 million times.

Walt Disney World Resort in Orlando, Central Florida is one of the world’s most magical theme park destinations. Along with the rest of the Disney Park portfolio, Walt Disney World welcomes millions of Guests all year round, bringing magic and memories to people every single day.

From Guests riding their favorite attractions like Space Mountain to staying at one of their favorite Disney hotels, taking a bite at a memorable restaurant, heading around World Showcase or down Main Street, U.S.A, getting spooked on Haunted Mansion, watching fireworks at Cinderella Castle, taking on the First Order in Star Wars: Rise of the Resistance, or even meeting one of the characters, Disney magic takes on many forms for many different people.

Recently, one Guest evoked a malicious response from much of the internet after she posted a video of herself meeting Goofy at the Disney Resort. Due to Goofy’s connection to her late grandfather, the creator can be seen sobbing as she hugs the beloved Fab Five Disney character, leading to backlash over Disney Adults at the Parks.

Sarah R. (@everydayisdisney) has now issued a new video on TikTok, clapping back at the malicious comments made about her interaction with Goofy at Walt Disney World Resort.

In the video, Sarah says:

“Last week, I posted a video of what was a heartfelt video of a character interaction at Disney World, what happened next was absolutely shocking. Let me give you a quick recap, last week I got to hug Goofy again for the first time since 2019. It was one of the most special character interactions I’ve had in a long time and all the Cast Members involved were absolutely wonderful. I saw Goofy turn the corner, and honestly, to a surprise to myself broke down in tears. Why? Because Goofy was my late papa’s, AKA my grandfather’s, favorite character.”

After showing a photograph of her grandfather with Goofy, Sarah continues:

“While it might sound ridiculous, hugging Goofy, to me, is as close as I’ll ever get to hug my grandfather again.”

The TikToker says it may be a “stretch” but it is something that means a lot to her, and after seeing the footage filmed by her mother, decided to post the interaction online to prove that Guests of all ages can experience Disney magic at the theme parks.

Sarah then states that while her intentions were to spread this message, a lot of comments were horrific and “vile” in nature, spewing this absurd Disney Adult rhetoric. To her surprise, the creator noticed that a lot of the backlash and malicious comments came from the youth community, and decided to use her platform to discuss the immense danger of cyber-bullying. She said:

“Based on what I’ve observed, we’re teaching them that as long as it’s behind a screen, you can say what you want without consequences […] and some of those consequences are irreversible.”

She ends the video with an emotional reminder of Walt Disney’s vision when he opened his first theme park, the future Disneyland Resort in Anaheim, Southern California:

“To all who come to this happy place, welcome. Disneyland is your land. Here age relives fond memories of the past…and here youth may savor the challenge and promise of the future. Disneyland is dedicated to the ideals, the dreams and the hard facts that have created America…with the hope that it will be a source of joy and inspiration to all the world.”

Sarah signs off the video by saying:

“All the world…Disney Adults included.”

Disney Adults often come under fire with some Guests visiting the Parks claiming that they are meant for children and families, however, as Sarah reminds us, Disney is for everyone.

What is your favorite Disney World memory? Let us know in the comments down below!