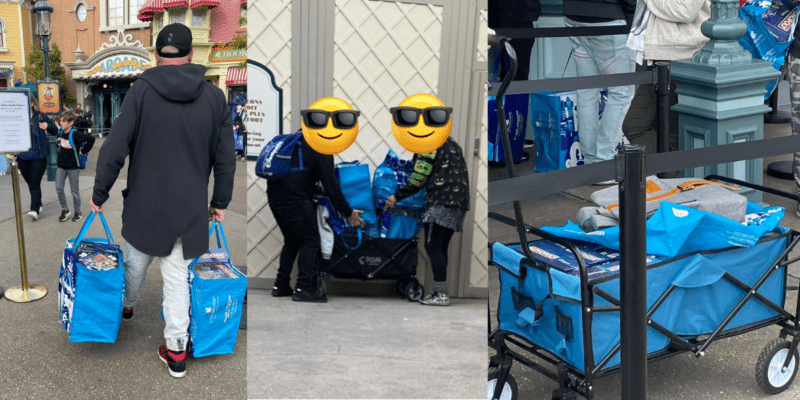 Resellers are a major problem at Disney Parks worldwide. Fans have long asked The Walt Disney Company to crack down on Guests who purchase excess merchandise to sell online at inflated prices.

Walt Disney World Resort and Disneyland Resort have enacted purchasing limits for some items, but this doesn’t always work. Many Guests come in pairs, swapping out to purchase the maximum limit of each item repeatedly. Some resellers even sell items that were given away for free!

The latest incidence of merchandise hoarding happened at Disneyland Paris this week. The Disney Park recently introduced an exclusive edition of Monopoly celebrating the 30th Anniversary of Disneyland Paris, which fans eagerly traveled to purchase.

Many unhappy Guests shared photos of resellers hoarding copies of the board game, like @Disneylandpbp:

Loosely translated, the post jokes that Disneyland Paris Monopoly “seems to be a big hit.” @dlp_guests_show shared a photo of more Guests stuffing a wagon with the board game:

Disneyland Paris Monopoly listings have already appeared on eBay, with one seller offering ten copies at $95 each, or 97.31 Euros.

Despite vocal complaints, people are buying Disney Parks merchandise at inflated prices. One copy of the board game from this seller has already sold. A search of “sold” Disneyland Paris Monopoly listings on eBay shows at least ten copies sold at prices ranging from $73.88 to $124, plus shipping.

The game was exclusively available to Annual Passholders on October 19. Regular Guests will be able to purchase Disneyland Paris Monopoly on October 20.

Did you buy a copy of Disneyland Paris Monopoly?