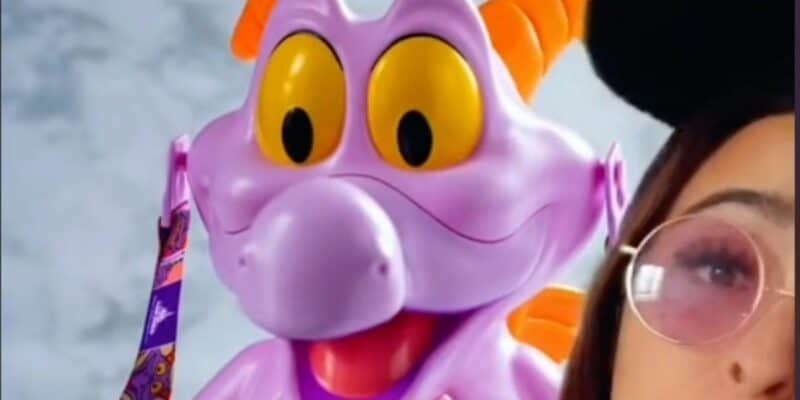 IMAGINATION! It’s a little spark from me and you! If you love this funny purple EPCOT dragon, you’ll be elated to know that Walt Disney World Resort has a new popcorn bucket upcoming up this month. The EPCOT International Festival of the Arts is debuting this gem starting on January 14, 2022.

The Disney Parks TikTok gave a special sneak peek glimpse at what we can expect in only a few days. A new Figment popcorn bucket is coming on January 14, 2022, just as the EPCOT International Festival of the Arts debuts. The popcorn container features a classic strap with Figment faces, and Figment (the bucket) himself is in a sitting position. You can find this Disney popcorn bucket near Port of Entry at the Pop! Eats stand.

It’s a bit unclear as to where the popcorn bucket opens from, but we’re going to assume it’s on the backside of his head, similar to the Mickey Balloon popcorn buckets. The @DisneyParks short clip was released on January 6, and is captioned,

When we find out about the new #popcorn bucket before it launches 😉 Jan. 14 #Epcot #FestivalOfTheArts 💜 (2 per guest) #Disney #DisneyWorld #Figment

When we find out about the new #popcorn bucket before it launches 😉 Jan. 14 #Epcot #FestivalOfTheArts 💜 (2 per guest) #Disney #DisneyWorld #Figment

Other refillable popcorn buckets have been incredibly popular at Disney World and Disneyland alike, with a discounted refill available for those that had purchased the popcorn container. What’s unusual sometimes is that Disney will tell you, your discounted refills are good for “length of stay.” But what if you are a local that repeatedly comes every week, months at a time?

Well, your refillable popcorn bucket might “appear” to have an age – such as a special release (like Figment) or simply lose its coloring eventually as users visit the theme parks. When you visit a popcorn cart, like the flavored popcorn cart at EPCOT, the Cast Member has the discretion to allow a popcorn refill in separate paper containers. This varies wildly between Disney Guests, with some using a popcorn bucket for over a year and some identifiably losing refills with a promotional bucket.

Be sure to stop by EPCOT for the new popcorn bucket promotion during the art festival special event and order your Figment at the popcorn cart!

Will you be collecting this gem of imagination? Leave us a comment below!