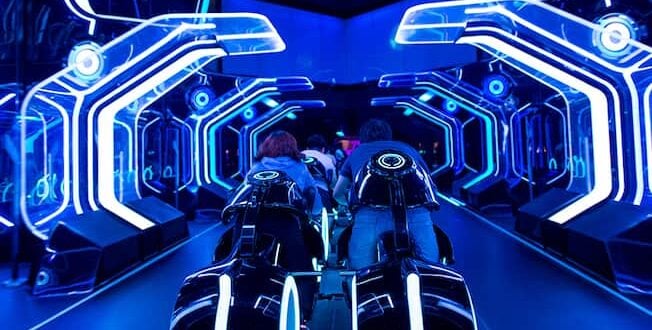 It has been a long time since The Walt Disney Company announced the addition of a TRON attraction at Walt Disney World Resort in Orlando, Central Florida. Similar to the ride found in Shanghai Disneyland at Shanghai Disney Resort, TRON Lightcycle / Run has already spiced up the Magic Kingdom skyline with its glowing blue canopy, and will hopefully soon board Guests for their trip to The Grid.

Until Disney Parks announces the opening date and Guests can start planning their vacations, here is the complete guide of everything we know so far about TRON Lightcycle / Run.

What is TRON Lightcycle / Run?

TRON Lightcycle / Run is a brand new attraction coming to Magic Kingdom Park at the Walt Disney World Resort. The ride was first announced five years ago during the D23 Expo 2017 in Anaheim, Southern California, and was slated to open during Disney World’s 50th anniversary — The World’s Most Magical Celebration. However, due to the COVID-19 pandemic, construction was delayed with no new opening date announced.

Our story picks up following the events of “TRON: Legacy,” whose main character, Sam Flynn, is now opening new gateways into this digital realm at specific locations around the world. The first portal he created is at Shanghai Disneyland with the original TRON Lightcycle Power Run, and now Magic Kingdom guests will get their turn through this second gateway.

The attraction will be a major new addition to Magic Kingdom Park, and will follow the recent launches of Remy’s Ratatouille Adventure and Guardians of the Galaxy: Cosmic Rewind at EPCOT Park. Guests have been crying out for a new thrill attraction at Disney World’s busiest theme park for some time. After Star Wars: Galaxy’s Edge, along with the game-changing Star Wars: Rise of the Resistance, and Toy Story Land opened at Disney’s Hollywood Studios, the aforementioned EPCOT rides, and the earlier launch of Pandora — The World of Avatar at Disney’s Animal Kingdom, Magic Kingdom has been in need of a dose of newness and the TRON coaster seems to be the answer.

Where is TRON Lightcycle / Run located?

TRON Lightcycle / Run will be located in Tomorrowland at Disney World’s Magic Kingdom. The futuristic land is just one part of the Disney Park and joins Main Street U.S.A., Adventureland, Fantasyland, Frontierland, and Liberty Square in making up the popular Disney vacation destination.

Found near Tomorrowland’s staple thrill attraction Space Mountain and the Tomorrowland Speedway, TRON Lightcycle / Run will launch Guests through The Grid and into the Magic Kingdom skyline. For those curious about construction updates, the ride development can be seen from the ground or while experiencing attractions like the Tomorrowland Transit Authority PeopleMover. When the roller coaster is open, Guests will also be able to approach it from Fantasyland’s Storybook Circus.

What we set in place […] is the first of nearly 40 pieces that will create a dramatic “curved wave” canopy, known as the Upload Conduit. Each section is strategically assembled before installation, including alignment of the steel, welding, grinding, some painting and electrical work.

The Upload Conduit will no doubt become a staple of the Magic Kingdom skyline as riders take to the skies under the sprawling structure located in Tomorrowland.

One downside to the TRON roller coaster construction is the continued closure of the beloved Walt Disney World Railroad, which has not been giving Guests the grand circle tour of Magic Kingdom since 2018.

When is the opening date for TRON Lightcycle / Run?

Unfortunately, no opening date has been announced for TRON Lightcycle / Run. As stated earlier, the attraction was looking to open during the 50th anniversary festivities but the cuts on Parks development left TRON Lightcycle / Run delayed. Now, it is likely that the answer will come from the Disney Parks showcase — A Boundless Future: Disney Parks, Experiences, and Products — with Chairman Josh D’Amaro at the D23 Expo 2023 on Sunday, September 11, 2022.

What is the ride system for TRON Lightcycle / Run?

TRON Lightcycle / Run is a semi-enclosed steel motorbike roller coaster. The speedy coaster features side-by-side motorbikes — or lightcycles — on a steel track that propels Guests under the color-shifting canopy. A pad situated behind the rider keeps them in place during the experience.

Earlier this year, the attraction entered its phase 2 testing phase, coined the “push/pull”, which sees the ride vehicles moving around each part of the track, eventually increasing speed incrementally before moving to full-speed launches both unmanned and manned. In fact, just recently, TRON Lightcycle / Run was seen testing at Magic Kingdom with more likely happening as we near the opening.

Housing the rider and their ride vehicle, the lightcycle, during TRON Lightcycle / Run will be the canopy — or Upload Circuit. Zach Riddley talked about how this monument will factor into the ride experience. He said:

This canopy will be a massive, awe-inspiring structure flowing organically over you when you race beneath it aboard your Lightcycle, serving as a digital bridge for your transition into The Grid. As the Lightcycles whiz by, dynamic stripes of lights will follow along the canopy, creating a powerful visual for riders and bystanders alike. Just wait until you see this at night … it will be spectacular.

Judging by this photo, it seems riders will also be able to catch the Cinderella Castle fireworks, Disney Enchantment — if the spectacular is still running — will on the ride vehicle.

How fast is TRON Lightcycle / Run?

TRON Lightcycle / Run will be one of the fastest rides on Disney property reaching speeds of just under 60mph at its top speed.

What will the queue be for TRON Lightcycle / Run?

Queue lanes are always improving at the Disney World theme parks, and TRON Lightcycle / Run appears to be no different. Chris Beatty explains how riders will experience the time before mounting the lightcycles:

When you enter the attraction’s queue, you’ll feel as if you’re digitized and entering the Grid for a special Lightcycle race alongside your family and friends. You’ll all join Team Blue (hence the color of the wheels in the photo above) for a high-speed launch into a competition against Team Orange. As you swoop and swerve your way around the course, your goal is to be the first to race through eight Energy Gates and secure your victory. Will your team have what it takes?

Will TRON Lightcycle / Run be a Disney Genie+ or Lightning Lane attraction?

Like the opening date, it is not clear what tool Guests will have to use to board TRON Lightcycle / Run. History suggests that when the attraction initially opens it will operate with a virtual queue, as was the case for Star Wars: Rise of the Resistance at first, and currently is for Guardians of the Galaxy: Cosmic Rewind, with an option to pay per ride with the a la carte Individual Lightning Lane Selection part of the Disney Genie system.

Is there another TRON Lightcycle / Run by Disney Parks?

Yes! The first TRON attraction at Disney Parks can be found in Shanghai Disneyland at the Shanghai Disney Resort. It quickly became a fan-favorite at the Resort, and while the name is different — Shanghai’s version is called TRON Lightcycle Power Run –, the new attraction at Magic Kingdom is said to be a carbon copy of this inaugural TRON-themed ride, although expect slight differences.

So, as Disney seemingly readies itself to announce the opening date of TRON Lightcycle / Run, the attraction looks to be on track. With testing the vehicles to the lights, as well as the movie’s 40th anniversary happening this year, the new addition to Magic Kingdom is coming very soon!

Are you looking forward to TRON Lightcycle / Run? Let us know in the comments down below!