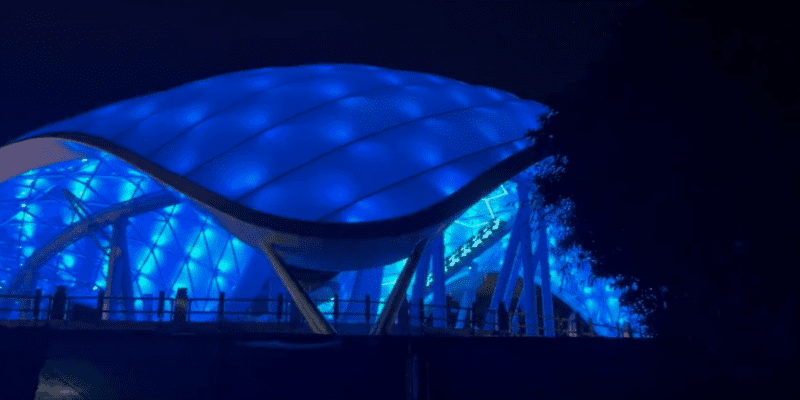 Walt Disney World fans cannot wait for the day they can take off on TRON Lightcycle / Run. Construction began back in 2019 and was delayed due to the COVID-19 pandemic. However, now that Disney Imagineers continue to work on the upcoming Tomorrowland roller coaster attraction, it seems we are inching closer to an opening day.

We recently saw the roller coaster testing both with no passengers and with actual human beings within the past few weeks, but now, Guests spotted the ride testing with the lighting effects, something we have not yet seen at the TRON site!

In a vide shared by Scott Gustin to Twitter, we can see the TRON ride vehicle zoom past as select lights turn on and off inside the canopy. Gustin writes:

Although there is no guarantee, we are hoping to finally get an opening date at D23 this year, which will take place September 9-11 in California.

Inside the Magic will be attending D23 and will update you as we get news regarding the Disney Parks.

TRON Lightcycle / Run will be one of the many attractions at Magic Kingdom in Walt Disney World. Guests can also ride attractions such as Pirates of the Caribbean, “it’s a small world”, Splash Mountain, Haunted Mansion, Space Mountain, Carousel of Progress, and more. Or hop over to EPCOT, Hollywood Studios, or Disney’s Animal Kingdom for even more Walt Disney World fun!

If you want to visit Walt Disney World and its four theme parks — Magic Kingdom, EPCOT, Disney’s Hollywood Studios, or Disney’s Animal Kingdom — on your next family vacation to experience everything the Parks have to offer, visit the official Walt Disney World website to start planning today.