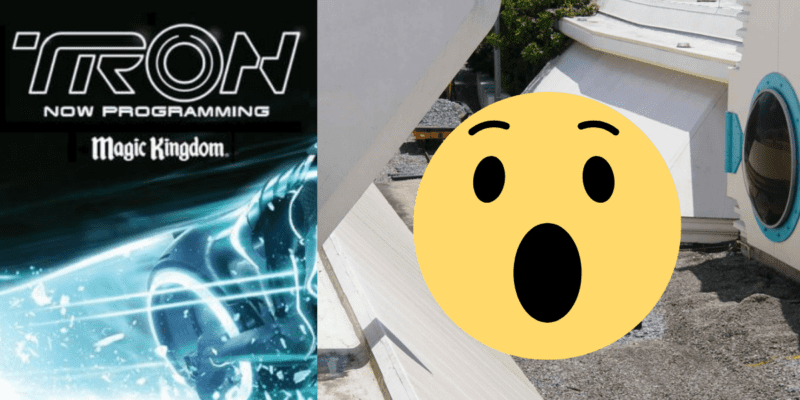 The Walt Disney World Railroad is three years into what will reportedly become a six-year-long closure at Magic Kingdom. Initially closed for the construction of TRON Lightcycle Run in Tomorrowland at the Walt Disney World Resort, it will remain closed long after the ride opens for ongoing refurbishment, with no reopening date announced.

However, this week, we got a sneak peek at the return of Walt Disney’s beloved steam train at the TRON construction site.

Twitter user @bioreconstruct shared a photo from the TRON Lightcycle Run construction site. In it, you can see partially completed railroad tracks adjacent to the concrete queue area for Space Mountain in Tomorrowland.

The user states the tracks run from Storybook Circus at Magic Kingdom through Tomorrowland, writing:

Starting to replace steam train tracks between Tomorrowland and Storybook Circus. Crushed stone is in a nearby car. Rails are raised in preparation for ties. Concrete area is the Space Mountain queue tunnel.

Starting to replace steam train tracks between Tomorrowland and Storybook Circus. Crushed stone is in a nearby car. Rails are raised in preparation for ties.

TRON began officially testing last month, but Disney hasn’t announced an opening date for the delayed coaster. Meant to open as part of the 50th Anniversary Celebration at Walt Disney World Resort, fans have wondered if the ride will ever be completed.

Based on TRON Lightcycle Run at Shanghai Disneyland, Magic Kingdom’s TRON will be a partially enclosed steel motorbike rollercoaster.

The latest official TRON update came from Disney last week when they shared an on-ride video of the coaster during a test run at Magic Kingdom. Earlier this year, Disney Imagineers explained more about how Disney Park ride-testing works in a Disney Parks Blog post:

Our Walt Disney Imagineering project team will soon celebrate a significant milestone on the construction of the TRON Lightcycle / Run attraction, as guests at Magic Kingdom Park will be getting their first glimpses of ride vehicles on the track!

As we begin the next phase of ride testing, we’ll soon start a process known as “push/pull,” where sections of the seven-vehicle train are slowly moved through the entire ride track. Once the track is completely ready, trains will begin launch tests at incremental speeds, with the team eventually working their way up to full-speed launches.

All of this exciting progress will be visible to our guests in Tomorrowland at Magic Kingdom Park as trains make their way out of the launch zone and underneath the attraction’s iconic canopy.

Are you excited for TRON Lightcycle Run to launch its way to the Walt Disney World Resort? Let us know in the comments.