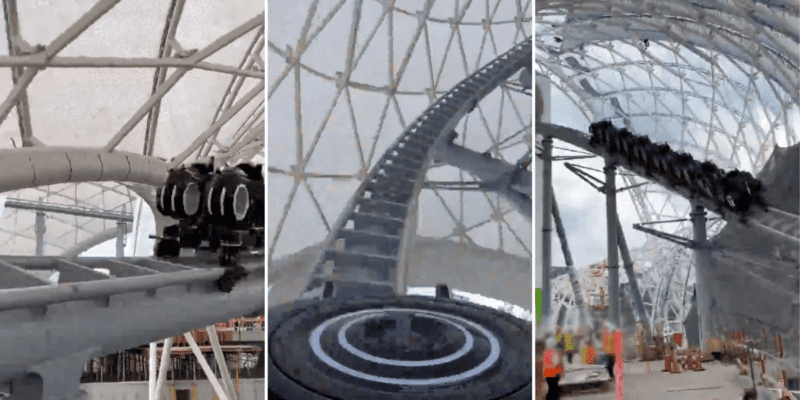 One of the most highly-anticipated attractions at Walt Disney World Resort is making major progress towards opening.

When visiting Magic Kingdom, Disney Park Guests are always looking to ride iconic attractions like Haunted Mansion, Jungle Cruise, Pirates of the Caribbean, “it’s a small world”, and Splash Mountain. One of the most beloved lands in Magic Kingdom is Tomorrowland.

In Tomorrowland, you can take a ride on Space Mountain then hit up the Tomorrowland Transit Authority PeopleMover for a look at tomorrow’s future today. Walt Disney’s Carousel of Progress is a classic and Buzz Lightyear’s Space Ranger Spin is a blast. Don’t forget to head over to the Monsters Inc. Laugh Floor, as well, to see Mike Wazowski and enjoy a hilarious and interactive performance.

The most anticipated attraction coming to Magic Kingdom will also reside in Tomorrowland: TRON Lightcycle/Run.

The coaster has been under construction for multiple years now but is now making major progress. We recently reported on testing taking place at the attraction and now Disney Parks has unveiled an official video that even includes on-ride footage of the first full-speed launch test of the coaster!

Based on the popular film franchise, TRON Lightcycle Run in Orlando will be heavily influenced by the TRON Lightcycle Power Run coaster at Shanghai Disneyland. This ride’s official description reads:

Are you looking forward to TRON Lightcycle Run opening in Magic Kingdom?