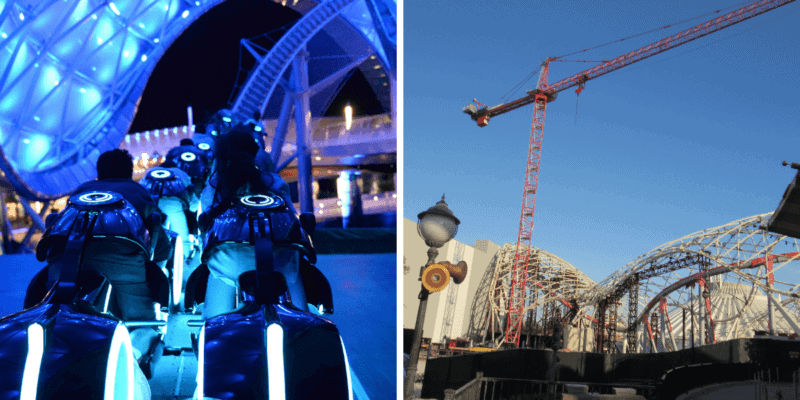 It’s been almost four years since fans learned that a version of the popular Shanghai Disney Resort ride, TRON Lightcycle Power Run, would be coming to the Walt Disney World Resort in Florida.

The roller coaster — called TRON Lightcycle/Run at Magic Kingdom — was originally scheduled to open in 2021 for Disney World’s 50th anniversary celebration. Fans have been patiently watching and waiting as construction on the Florida theme park roller coaster has been getting closer and closer to completion.

So far, it has not been confirmed whether the TRON coaster at Disney World will be an exact replica of the one that can be found in Shanghai. In fact, Disney has pretty much kept mum on what Guests can expect from this new Disney World coaster.

Unfortunately, due to the COVID-19 pandemic, work on the new TRON coaster had to stop and TRON was removed from a list of Disney rides opening in 2021. An official opening date has not been announced.

While Disney has remained relatively quiet, Guests have been able to share pictures of the construction as progress has been made in Tomorrowland at the theme park.  In January, Bioreconstruct shared the following images to Twitter:

Current state of the Tron canopy frame, as seen from Storybook Circus.

Current state of the Tron canopy frame, as seen from Storybook Circus. pic.twitter.com/U3CpugV3Ro

Since the park has been able to reopen, crews have been working hard and are moving along. Some major pieces have even been seen being put into place!

Inside the Magic was at the Magic Kingdom recently, and we can share some of the most recent construction occurring on Disney World’s newest Tomorrowland coaster.

There are still cranes around the structure to be able to lift larger pieces of the TRON coaster, but a lot of support beams have been removed and the freestyle wave canopy is taking a nice shape.

Here, we can see the building that will house most of the ride, and the wave canopy attached to it that will make the look of the coaster flow seamlessly.

The TRON coaster’s temporary signage gets us so excited for the ride but doesn’t provide any additional opening information. All we can hope is that most of the ride is already completed inside the building and the outdoor area will be the final piece of the puzzle! We cannot, of course, know this, though, until Disney makes an official announcement.

For those who can’t wait until TRON finally opens in the Magic Kingdom, here is a virtual ride-through of the TRON Lightcycle Power Run at Shanghai Disneyland!

How excited are you for this incredible new ride to open in the Magic Kingdom? Have you ridden the one in Shanghai Disneyland? Let us know in the comments!