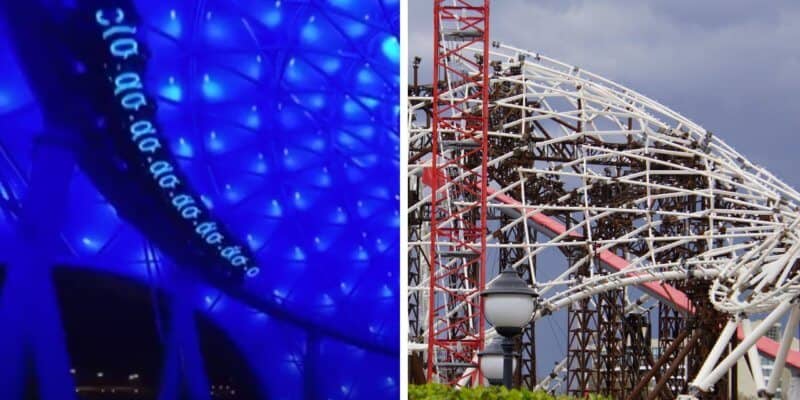 If there is one attraction at Walt Disney World Resort that many Guests are patiently awaiting to experience, it is TRON Lightcycle / Run. The new TRON-inspired coaster has been under construction for years now in Disney’s Magic Kingdom, back in the Tomorrowland section of the park.

Now, it seems that construction is ramping up.

TRON Lightcycle / Run is an attraction that many Guests have speculated would open in 2021 in time for the 50th anniversary celebration, while others have speculated it won’t be ready until 2022. Disney has yet to give an exact opening date at this point, so speculation is truly all fans can go off of at this point.

One of the best ways Disney lovers can make their guesses in terms of when an attraction will open is to take a look at the construction progress of the attraction.

Related: Will EPCOT Be Ready For the 50th Anniversary? Full Construction Update

Thanks to Biorecontruct (@Bioreconstruct) we can see exactly how far Disney is in terms of the outdoor contraction of the canopy on TRON Lightcycle / Run.

The Tron canopy is almost complete. A few sections at the top. Will there be a topping off ceremony? In American construction it’s common for the last piece of a structure to be raised with a flag and a tree.

The Tron canopy is almost complete. A few sections at the top.

Will there be a topping off ceremony? In American construction it's common for the last piece of a structure to be raised with a flag and a tree. pic.twitter.com/BoVoTaizRz

From this image, we can clearly see that the canopy is almost fully put together, but there is still a long way to go. The canopy, which will light up at night, is meant to be a free-standing object, but at the moment, it is not. The final piece may go into place shortly, but the canopy is currently being held up by a variety of brown structural beams which will need to be removed. Bioreconstruct also noted the same thought in the Tweet below.

Can you spot the Osprey nest in the Tron canopy? This brown framing is temporary, and being removed now that the white freeform structure is self-supporting.

Can you spot the Osprey nest in the Tron canopy?

This brown framing is temporary, and being removed now that the white freeform structure is self-supporting. pic.twitter.com/xgqhuQHw3h

Of course, having them there for construction is essential to ensure the canopy does not topple while it is still unstable, but it also shows that there is likely still quite some time until the coaster will be ready for Guests.

For example, if we take a look at VelociCoaster in Universal Orlando Resort, that is a coaster that is set to open in a few months, and it is constantly testing, at times, even with Guests now test-riding. If TRON Lightcycle / Run were to open in time for the 50th-anniversary celebration in a few months, we would likely need to see a lot more progress on the coaster by this point. That being said, again, Disney has not stated when the coaster will open and this is speculation.

TRON Lightcyle / Run was also not mentioned in the list of what Guests can expect in 2021 such as HarmonioUS or Remy’s Ratatouille Adventure, which are both set to open at EPCOT. That being said, Disney has not confirmed nor denied if the coaster will open this year or next.

If you are impatient and want to ride TRON, you can check out our video of the attraction in Shanghai Disneyland. Although the Disney World attraction may not be identical, it is going to be very similar to the original Shanghai coaster.

When do you think that TRON Lightcycle / Run will open to Guests?

If you want to be at Walt Disney World Resort to celebrate the 50th anniversary in front of Cinderella Castle, you need to get booking today to ensure you arrive on time in Orlando! You can visit Magic Kingdom, Animal Kingdom, Disney’s Hollywood Studios, and EPCOT and explore the parks with Mickey Mouse and Minnie Mouse! Disney Springs will also have all the dining your heart desires if the festival leaves your tummy rumbling. Disney Park Pass reservations are selling fast, so click here to get started!