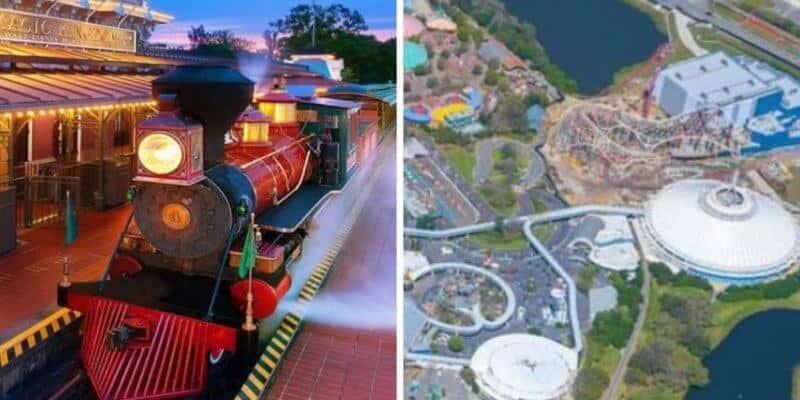 Ever since December 2018, the Walt Disney World Railroad has, unfortunately, not been able to give Guests the grand circle tour of Magic Kingdom. This had to be done in order for Disney World to begin construction and make way for the upcoming TRON attraction, which will be located in Tomorrowland.

Now, as construction continues on TRON, and we can see the coaster really beginning to take shape, we noticed something interesting that may affect how the Railroad will run once it reopens to Guests.

Photographer and professional pilot, Jonathan Salazar, took to Instagram to share an aerial photo of Magic Kingdom, along with the caption:

Welcome, to the Magic Kingdom. ?✈️
.
.
*Cues Jurassic Park them song* ?
.
.
?Hi friends! It’s been a while, but life has just been incredibly busy! I hope you are all doing well and enjoying life and the parks!
.
.
?In this photo, you can spot a couple unique(hidden) backstage spots at the Magic Kingdom! ?Comment below with what you find! ?
.
.
?Have a Magical Day!

After further examining the image Salazar shared, we noticed that the old Walt Disney World Railroad track cannot be reinstalled where it previously stood because of the new TRON coaster tracks. We took a screenshot of the image (below) so you can better see what we mean.

If you look at where the TRON track currently sits, you can see that it is interfering with where the old Walt Disney World Railroad track ran. With this being said, Disney appears to need to to redo the some of the track and reroute the Railroad so that it can run in a different place (around TRON) in order to complete the grand circle tour. We have already seen the rerouting begin as construction progresses on the Railroad track sduring the time of the attraction’s extended closure.

When construction needs to take place in the Disney Parks and it interferes with the Railroad, Disney will, inevitably have to make some changes. This is something that Disneyland had to do when the theme park built Star Wars: Galaxy’s Edge. In case you didn’t know, Disneyland Park had to reroute the Disneyland Railroad when they constructed the highly-anticipated land, Star Wars: Galaxy’s Edge. Therefore, it looks like this is something Walt Disney World Railroad is doing as well in order to coincide with TRON Lightcycle / Run.

At this time, Disney World has not announced when the Walt Disney World Railroad will reopen or if they will be redoing the track/route to work around the new TRON coaster, but from the aerial photo, it is clear Disney World will have to do something different than it was prior to complete the track around Magic Kingdom.