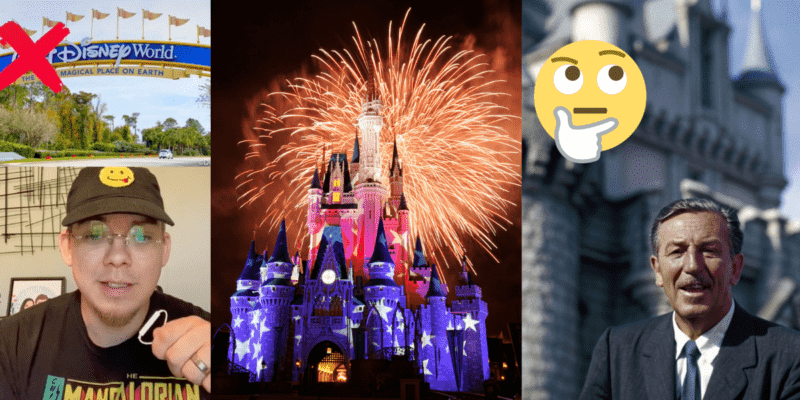 Walt Disney World Resort was named after the man behind the Mouse, Walt Disney. While he didn’t live to see his “Florida Project” open, his brother Roy Disney announced on October 1, 1971, that it would be posthumously named after him to honor his legacy.

Though fans are frustrated with changes at the Disney Parks in the last few years, including the retheme of Splash Mountain and the implementation of Genie+, Walt Disney said that his Parks should evolve as time goes on:

However, a swirling rumor suggests that one significant change might come to the Central Florida Theme Parks. Walt Disney World may shorten its name to simply “Disney World.” @swizey shared his thoughts in a TikTok video:

According to this Theme Park enthusiast, “Walt Disney World is looking to shorten its name down to just ‘Disney World.’”

He notes that many people already shorten the Resort’s name in everyday life but says it may not be the reason for the change.

“One of the main reasons may be that Walt himself has actually become a problem to the company over the last few years,” the TikToker says. “Many accusations about Walt coming to light, of things that wouldn’t be so magical today.”

Though Walt Disney is held in high regard by Disney fans worldwide because, as this Disney fan says, “he was the creator of Disney and the reason why we have so many movies that we love today.”

“But nowadays, when it comes to profit, accusations are enough for a company to do something as drastic as this,” he explains. “With his opening day speech at Disneyland being removed from this year’s anniversary, there’s a sure sign of the path that Disney is on.”

The creator is referring to the Walt Disney World Resort’s 50th Anniversary Opening Ceremony, which featured Mickey Mouse, Minnie Mouse, and other Disney pals singing and dancing at Magic Kingdom – but didn’t feature Walt Disney’s infamous Disneyland Resort opening speech, which has been quoted at other significant Disney Park anniversaries, such as EPCOT’s 35th in 2017.

As far as accusations about Walt Disney, the TikToker doesn’t specify. However, racist imagery has long existed in classic Disney films, such as Peter Pan (1953), Dumbo (1941), and the widely-banned Song of the South (1946). Some of these films now have cultural sensitivity warnings on Disney+.

There have also long been rumors that Walt Disney was anti-Semitic, widely dismissed by people who knew him. In his book, “Walt Disney: The Triumph of the American Imagination,” Neal Gabler said the rumors are based on a scene in The Three Little Pigs (1933) in which the Wolf is depicted as a Jewish peddler. That scene was later reimagined and reanimated.

Gabler also notes that a month after Kristallnacht, in 1938, Disney welcomed a Nazi director, Leni Riefenstahl, to his studios. Riefenstahl is known for producing Nazi propaganda and was alleged to be “Hitler’s Favorite Filmmaker.” According to Gabler, however, Disney practiced tolerance in his home life:

“There is some dispute whether the same spirit of tolerance extended to the studio, but of the Jews who worked there, it was hard to find any who thought Walt was an anti-Semite.”

Because Walt Disney passed away in 1966, it’s impossible to know his true beliefs on race, religion, and other sensitive topics. But many things have changed at the Disney Parks since his day. Walt Disney used to smoke around Disneyland Park, which is now banned at every United States Disney Park.

It’s important to note that this is just a rumor based on a cultural shift and, likely, the removal of Walt Disney World Resort’s iconic welcome sign, featured in @swizey’s video. Inside the Magic will report any updates to this story.