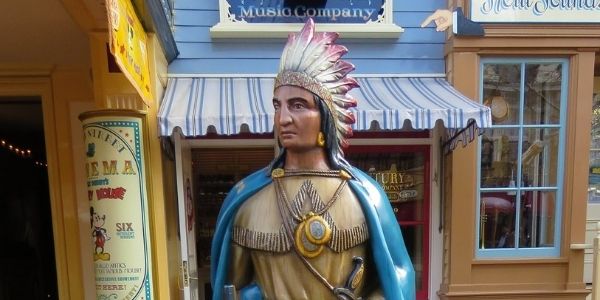 Disney continues to find itself at the center of nation-wide controversy, with the company now dealing with the backlash of what ended up being a racist school cheer team performance at the Walt Disney World Resort in Orlando, Florida.

Last week, The Port Neches-Groves Independent School District performed at the Magic Kingdom, complete with Native American-inspired uniforms, and sang an incredibly-insensitive chant as they marched down Main Street U.S.A. The offensive chant included the phrase “Indians, scalp ’em, Indians scalp ’em”, along with other insensitive movements and words.

The backlash to the school and Disney for allowing this to happen has been intense, with calls on Disney to apologize. Earlier this month, Disney also found themselves in a heap of controversy after failing to disapprove of Florida’s “Don’t say gay” bill. Eventually, Disney CEO Bob Chapek came out and publicly took a stand against the bill, offering a pledge of $5 million to the Human Rights Campaign. However, the organization actually turned down the donation, citing the need for “more meaningful action”.

Suffice to say, the Disney company has had a rough few weeks in the PR department and those issued don’t seem to be going away anytime soon, with calls for Disney to remove racist stereotypes and representations in its Parks after the cheer incident. We already covered how fans are crying out for Disney to remove the offensive Native American representation from Peter Pan’s Flight. Now, fans are speaking out about another offensive display.

Due to these scenes in question, Peter Pan is one of the various films that has recently been removed from children’s profiles on Disney+ for “breaching content advisories”. As for adult profiles, Peter Pan remains available but it does display a content warning before the movie plays. Now, shown in a photo on Twitter, a stereotypical statue of a Native American, what some may call a “cigar store Indian” can be seen. See the statue below in a tweet from Kristin Chirico (@lolacoaster):

And while we’re at it: @DisneyParks remove the f***ing cigar store Indians challenge. Just get rid of them. GET RID OF THEM! You could do it in A NIGHT. What is the issue?!

And while we're at it: @DisneyParks remove the fucking cigar store Indians challenge. Just get rid of them. GET RID OF THEM! You could do it in A NIGHT. What is the issue?! pic.twitter.com/UmALT4Rnwa

As you can see, the display is out in the open on Main Street U.S.A. at Disneyland. With new light shed on this issue, it will be hard for most Guests to look past all of the inaccurate or insensitive Native American representation in the Parks.

It’s so bad! And each show a guest is totally cool partaking in the racism.

It’s so bad! And each show a guest is totally cool partaking in the racism. 🤦🏾‍♀️

At the moment, that show has yet to return.

In recent years, Disney has made several efforts to be more inclusive in its Parks, making changes to several classic rides and attractions. One of the biggest examples of this was the announcement that Splash Mountain would be rethemed into a ride and story based on The Princess and the Frog (2009) and rid the racial undertones brought by Song of the South.

As you can see, Disney has a lot to work on when it comes to achieving its goals of inclusivity, diversity, and inclusion within the Parks. The Walt Disney Company has not made a statement about Peter Pan’s Flight or this display on Main Street U.S.A., but the pressure for change is mounting.

What do you think Disney should do about these insensitive decorations? Let us know in the comments below.