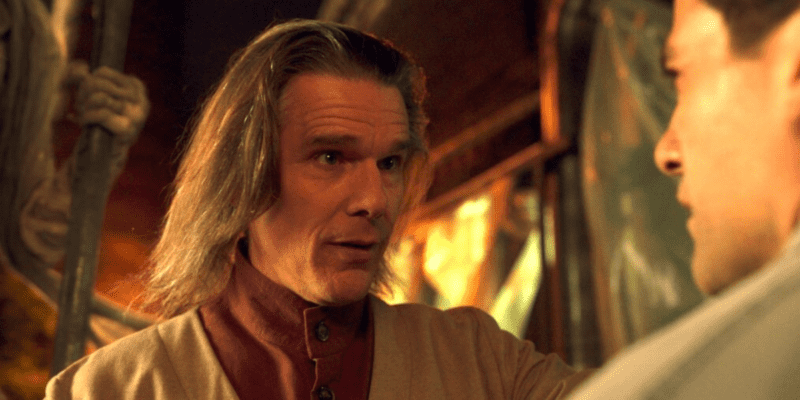 The Marvel Cinematic Universe is changing like never before with the addition of streaming series on Disney+. Moon Knight has proven to be one of the most enduring additions to Marvel’s Phase Four, but one actor might not return for a second season.

Even though Arthur Harrow (Ethan Hawke) met his demise in the series finale of Moon Knight at the hands of Khonshu (F. Murray Abraham) and Jack Lockley (Oscar Isaac), every Marvel fan has their theory that Ethan Hawke’s villain is somehow alive.

Whether or not that takeout scene was a dream within a dream, fans are hoping for a Moon Knight season two confirmation from Kevin Feige, but Ethan Hawke might not return to his iconic role:

Ethan Hawke says “I’m at the beginning of my last act” as an actor.

Ethan Hawke says “I’m at the beginning of my last act” as an actor.

Ethan Hawke is in no way stating that he’s retiring from acting or hanging up his directing chops, but the Before Sunrise (2001) star has shared with IndieWire that he feels he’s at the “the beginning of my last act”:

I’ve definitely made the turn from being an old young person to being a young old person. I prefer this. I feel like playing John Brown in “The Good Lord Bird” was that for me: the beginning of my “old man” career, the beginning of my last act. But it’s the beginning of it, you know? I definitely find myself looking over a filmography and thinking about which ones I could’ve cut out because I only have so much time left. I know I only have so many movies left. You have an awareness of time. When I was younger, I was like, “I’ll do this, I’ll do that, that’ll be a good learning experience, and then I’ll try this,” thinking I had all the time in the world. Now, I’m like, “I didn’t learn anything from that one or that one, and that one would’ve been better spent in three months with my family.”

Hawke is actively working on the final touches of HBO Max’s The Last Movie Stars, an in-depth and exclusive look into the final project of legendary Hollywood figures Paul Newman and Joanne Woodward.

Nonetheless, Ethan Hawke is taking each new role with caution and care, realizing that his family time is far more critical than another Hollywood installment. Whether or not Moon Knight fits that category of “take” is entirely up to the actor (and how the writing of Moon Knight season two could include Arthur Harrow).

Do you want Ethan Hawke to return for Moon Knight? Comment below!