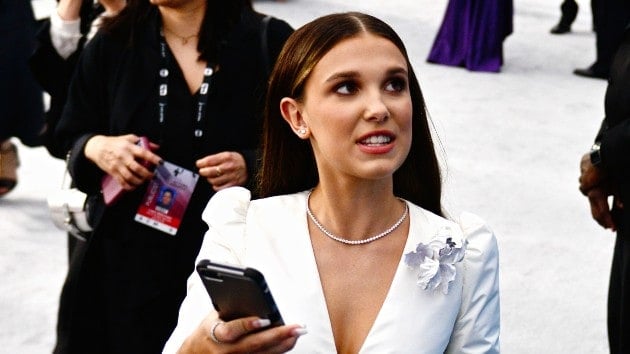 Brown was only 12 years old when she debuted as the demogorgan-fighting girl with superpowers on the hit sci-fi show. She turned 18 in May 2022, and it seems that she may now be on her way to starring in one of the most iconic science fiction franchises of all time.

Per a new report, Brown and her father and manager, Robert, are “in talks” with Lucasfilm President Kathleen Kennedy regarding a possible Star Wars role for the young starlet.

The article notes that the talks with Kennedy have been “informal” but that “The Disney executives know just how much of an icon she is already for the 10 to 30-year-old audience and what that brings in terms of appeal. She could easily take home $15 million for a first film or series.”

Brown is currently commanding a million dollars per episode for Stranger Things, which will air the final two episodes of the first half of Season 4 on Netflix on July 1, 2022. The second half of the season will return in October.

Brown has previously admitted that she has never watched any Star Wars movies or Disney+ Original series like The Mandalorian, but has acknowledged that she would enjoy playing Princess Leia Organa. During a 2017 interview, the actress said, “I love Carrie Fisher and it would be amazing to carry on her legacy.”

In early 2021, a viral deepfake video [below] featuring Brown as Princess Leia during the original trilogy era took the internet by storm. At the time, Star Wars fans noted that Brown’s uncanny resemblance to 19-year-old Fisher would make her a perfect choice for any upcoming projects set during that period of the Star Wars timeline.

Recasting iconic characters can be challenging, however, and is something that Kennedy has indicated the Lucasfilm team will be moving away from in the future as they focus on bringing new characters into the Star Wars galaxy.

Previously, CGI technology — which was used for a Princess Leia Organa cameo in Rogue One: A Star Wars Story (2016) and to bring Jedi Knight Luke Skywalker (Mark Hamill) back for his role in both The Mandalorian and The Book of Boba Fett — has helped to revive legacy characters.

Although Fisher tragically passed away soon after the Rogue One‘s release, she had approved the character prior to her untimely death. Fisher also appeared, in her late 50s, as General Leia Organa in the Star Wars sequel trilogy — Episode VII – The Force Awakens (2015), Episode VIII – The Last Jedi (2017), and Episode IX – The Rise of Skywalker (2019) — before her passing.

As for Brown’s future in the Star Wars universe, it seems likely that she will be cast as a new character rather than as Princess Leia.

With numerous shows and upcoming films on the horizon, including Patty Jenkins’s Star Wars: Rogue Squadron and both Thor director Taika Waititi and Marvel Studios President Kevin Feige’s movies, there are literally dozens of opportunities for Brown to make her Star Wars debut in the near future.

Although neither star’s involvement in Star Wars has been confirmed at this time, it would be enjoyable for the duo to reunite in the rumored Jedi Academy series that would theoretically detail the time between Ben Solo’s torching of his Uncle Luke’s Jedi school and The Force Awakens.

What kind of Star Wars character do you want to see Millie Bobby Brown play?