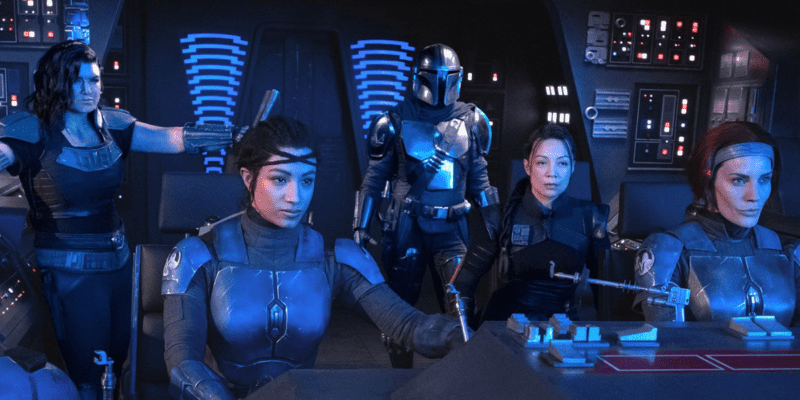 The Mandalorian season three is just around the corner, and Jon Favreau is already writing a season four of the Star Wars series. Now, fan-favorite actress Katee Sackhoff signals the return of her Bo-Katan character.

After rumors turned true of Kryze appearing in The Mandalorian with voice actress Katee Sackhoff bringing her Clone Wars animated character to life, fans knew that Ahsoka Tano and more were just around the corner.

By the end of The Mandalorian season two, Din Djarin loses Grogu, but gains the Darksaber — the right of Bo-Katan and her future rule of Mandalore.

While Djarin attempted to gift the saber to Bo-Katan essentially, she lost her chance to rightfully earn to right to wield the weapon after Mando defeated Moff Gideon (Giancarlo Esposito) in battle.

Katan now has to turn on Din Djarin. She’s out for blood as she grapples with the reality that her ally “stole” the Darksaber from her. While Sabine Wren gave the legendary saber to Bo-Katan in Star Wars: Rebels, she now believes she has to earn it by besting the owner in combat.

With the character’s future uncertain and reports suggesting that Bo-Katan somehow wouldn’t return for The Mandalorian season three, Katee Sackhoff just confirmed that her character is “not done”:

“She’s not done… Makes us question, it makes her question, ‘What’s different? Why not now?’ And that’s important.”

“She’s still on that journey, you know, from the first time that we met her when she was very young and impressionable. And she’s been continuing to evolve and grow and figure out who she is.”

While Koska Reeves (Sosha Banks) will reportedly not be back for another Mandalorian outing, Bo-Katan is set to be the main antagonist of The Mandalorian season three.

Undoubtely attempting to stop Din Djarin from redeeming his right as a Mandalorian, Bo-Katan’s journey will include intense action and possibly deadly encounters while earning the Darksaber from Mando.

Do you want a season five of The Mandalorian? Comment below!