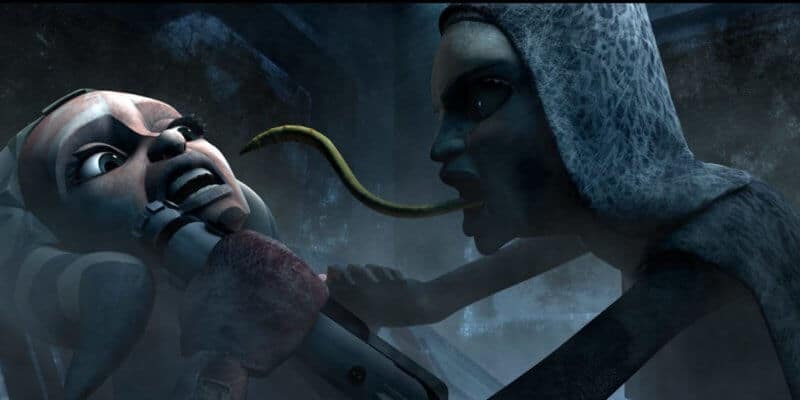 Star Wars guru — and Lucasfilm Executive Creative Director — Dave Filoni has long played a role in the trajectory of the Star Wars universe. From working alongside Star Wars creator George Lucas on Star Wars: The Clone Wars to helping to create hit series The Mandalorian with showrunner Jon Favreau, Filoni is, for many fans, the savior of the Star Wars franchise.

His episode of Mandalorian spinoff, The Book of Boba Fett, even saw him hailed as “a literal Star Wars god.”

The installment orchestrated the returns of Skywalker (CGI Mark Hamill/Graham Hamilton) — who officially interacted with his father’s Anakin Skywalker’s Padawan Ahsoka Tano — played in live-action by Rosario Dawson — for the first time, Grogu himself, and Marshal Cobb Vanth (Timothy Olyphant).

The popularity of Filoni’s work is part of the reason why many Star Wars fans were upset when the aforementioned animated series, Clone Wars, which originally introduced viewers to Skywalker’s apprentice, Ahsoka, and a host of other popular characters, came to an end after seven seasons.

Fortunately, Filoni already expanded on one Clone Wars storyline in Star Wars: The Bad Batch, a Disney+ Original animated show that follows the adventures of Clone Force 99 — Hunter, Wrecker, Echo, Tech, and Crosshair — during and immediately after the execution of Emperor Palpatine’s Order 66.

Now, Star Wars director, Howard, has given an interview about upcoming Mandalorian spinoff series, Ahsoka, and she has confirmed that Clone Wars fans are about to be “greatly rewarded” with that series, as well.

Howard shared details about her childhood with her father, Hollywood legend Ron Howard (Solo: A Star Wars Story, The Andy Griffith Show), and how George Lucas played a key role in her formative years:

“Growing up, our dad was, and still is to this day, very good friends with George Lucas who created Star Wars. We’re close in age to his kids. Last time I saw him, George was like, ‘I have a picture of all of you all in the bathtub together… ‘awesome, George.’ And so, every single year for Christmas, we would get Star Wars figurines. Before I was even old enough to know who the characters were and what the stories were, I was getting these little figurines, and I was very curious about it, and I was really into it.”

Howard went on to share some details about working with Filoni, and teased Ahsoka’s strong Clone Wars connection:

“Yeah. So, Dave Filoni, he knows Star Wars better than anyone other than George, and he was taught by George when he was doing all of the Clone Wars because they did that together. And we worked together on Mandalorian.”

“Without giving anything away, you are going to love the Ahsoka show that’s coming up. I cannot tell you anything, but what I can say is that you being a fan of the Clone Wars will be greatly rewarded.”

Ahsoka has long been presumed to function as a sequel to another Filoni animated series, Star Wars Rebels, and will presumably see its title character enter the World Between Worlds on her quest to find Grand Admiral Thrawn (Lars Mikkelsen) and fellow Jedi Ezra Bridger (Mena Massoud).

It is worth noting, however, that this is not the first time a Clone Wars connection has been established with Ahsoka. Jedi Barriss Offee is also expected to appear in the upcoming “Mando-Verse” show.

Ahsoka does not yet have an official release date, but is expected to land on Disney+ in 2023.