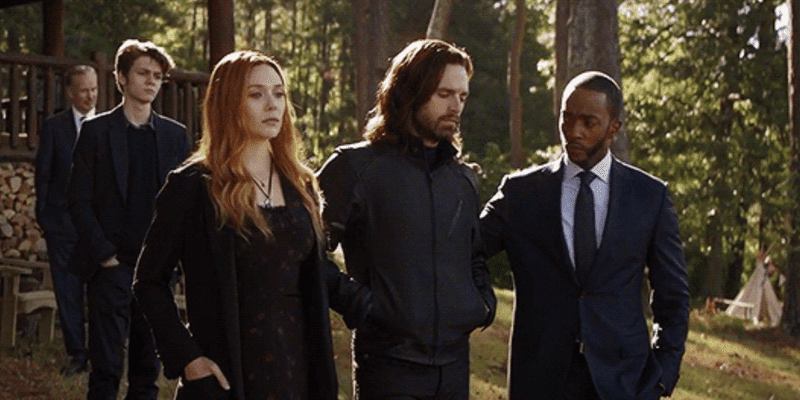 Anthony Mackie and Sebastian Stan’s “bromance” — both onscreen in the Marvel Cinematic Universe and in real life — is well-documented.

Ever since Marvel fans first saw Mackie (Sam Wilson/Falcon) and Stan (Bucky Barnes/Winter Soldier) properly team up in Captain America: Civil War (2016), they haven’t been able to get enough of the duo.

After what was seemingly their final scene together with Steve Rogers (Chris Evans) in Avengers: Endgame (2019), the fan community clamored for more of the unlikely partnership between the flamboyant Sam and stoic Bucky.

Then, in early 2021, Marvel Studios President Kevin Feige and his team delivered in the form of six-episode series, The Falcon and the Winter Soldier. In the season finale episode, Wilson officially took-up Cap’s shield and the mantle of Captain America.

Soon after the series wrapped, Mackie’s involvement in Malcom Spellman’s Captain America 4 was confirmed, though Stan’s appearance in the project remains purely speculation at this time.

And, although fans haven’t yet gotten their wish for a Season 2 of The Falcon and the Winter Soldier, Mackie and Stan’s friendship is going strong. Now, CMT Awards co-host Mackie has confirmed that his close friend is, in fact, the Avenger he would be most likely to take to a deserted island.

In the video below, the actor said:

“I would say Lizzie Olsen because I love to laugh at her because she’s a funny human being, but you know, everywhere I go, I take Sebastian. He’s my right hand. I’m sorry for being for unsurprising but that’s my dude, so if I’m going to a deserted island for five days, I’m gonna take my dude. We could do some fishing, drink a few coconuts. It’d be great.”

#CMTAwards co-host @AnthonyMackie has answers to your #CMTFanCam questions! Find out how he prepped for hosting 🧐 , his best dance moves, and more! https://t.co/SEZvWXO9uK

Although Elizabeth Olsen might have just been jokingly snubbed by her MCU costar, she is about to step back into the spotlight in Doctor Strange In the Multiverse of Madness on May 6, 2022.

Olsen will reprise her role as Wanda Maximoff/Scarlet Witch alongside Benedict Cumberbatch’s Doctor Stephen Strange. The next installment in the Marvel Cinematic Universe will take place after the events of both WandaVision and Spider-Man: No Way Home (2021).

Now that the Marvel Multiverse has been broken wide open, fans can expect numerous cameos, including Wanda’s twin sons Billy and Tommy and, perhaps, even the X-Men’s MCU debut.

Are you hoping to see more of Sam and Bucky’s friendship in the MCU soon?