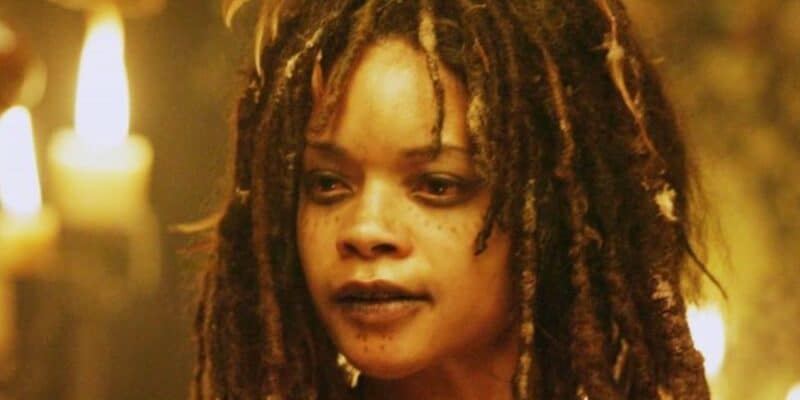 Although most Disney fans immediately think of the Pirates of the Caribbean franchise’s Tia Dalma (Naomie Harris) when they hear the name “Calypso,” a version of the goddess also appears in Marvel Comics. And, now, Oscar-nominate Ariana Debose will play Calypso in Kraven the Hunter (2023).

The West Side Story (2021) actress made history at the SAG awards 2022 as the first queer woman and Latina woman to win a film prize at the Screen Actors Guild Awards. Now, the Oscar-nominated actress is set to join the cast for Kraven the Hunter alongside Aaron Taylor Johnson and Russel Crowe. Reports say that Debose will be playing Calypso, a witch who was known to be one of Spider-Man’s enemies and Kraven’s lover.

Calypso will be an interesting character for Kraven as this movie is supposed to be the origin story for the expert tracker. The movie is reported to have a big focus on Kraven’s family with his half-brother, the Chameleon set to be the villain.

Calypso is considered by many Marvel Comics fans to be a psychopath and that’s because the character has made a few questionable decisions in the comics. She is a voodoo priestess who uses different relics such as the Amulet of Dambullah to enhance her abilities. To make her powers stronger, Calypso sacrificed her younger sister.  As Kraven’s lover, she would enjoy making the Russian tracker go into fits of rage as she would help deepen his hatred for Spider-Man. She went too far one day as Kraven committed suicide in the comics due to his inability to capture Spider-Man.

This led Calypso to go on a long journey to resurrect Kraven which led her to die at some point in the process. Yet, the voodoo priestess kept her soul intact and possessed other people until she could be resurrected with witchcraft. Her abilities led to her staying alive despite dying several times as she tried to bring Kraven back from the dead.

How will Calypso tie into Kraven?

Calypso will most likely end up as Kraven’s lover for the movie and will help him find Chameleon. Her use of potions and voodoo magic gives her a unique type of magic that hasn’t been explored yet. There’s a chance that Sony will use Calypso to make Kraven set his eyes on Spider-Man.

This would serve as a great catalyst for future movies as it seems that Sony is planting the seeds for a bigger universe with their characters such as Tom Hardy’s Venom and Jared Leto’s Morbius. Sony has a Madame Web project in the works with Dakota Johnson. After the huge success of Spider-Man No Way Home (2021), fans expect to see more of Andrew Garfield and Tobey Maguire’s Spider-Man.

With reports of Maguire appearing in Doctor Strange in the Multiverse of Madness (2022), fans hope that Garfield will appear in more Sony films. Fans have already begun demanding Sony to start working on Amazing Spider-Man 3.

Calypso already has some big ties with some of Spider-Man’s heroes and villains. In the comics, she took control of the Lizard and used him to try to kill Spider-Man. This only worked once and the few times Calypso has tried again, it has gotten her killed. Even though the Lizard was cured once again in No Way Home, there is no saying that perhaps Calypso could use these powers again. Another character Calypso has run into is Daredevil as the devil in hell’s kitchen stopped her from resurrecting Kraven. With the Multiverse, this is possible for Charlie Cox’s Daredevil to potentially show up one day to fight the voodoo priestess, but time will tell if this will happen in the MCU or Sony Universe.

Having Calypso join the cast creates a new dynamic that will definitely help add some more conflict for Kraven. In the comics, Kraven’s strength and abilities are enhanced with Calypso’s magic so it’s possible that this will happen in the film.

Kraven the Hunter releases in theaters on January 13, 2023.

Do you think Calypso will have a large role in the film? Will she be Kraven’s lover in the movie? Let us know what you think in the comments section below!