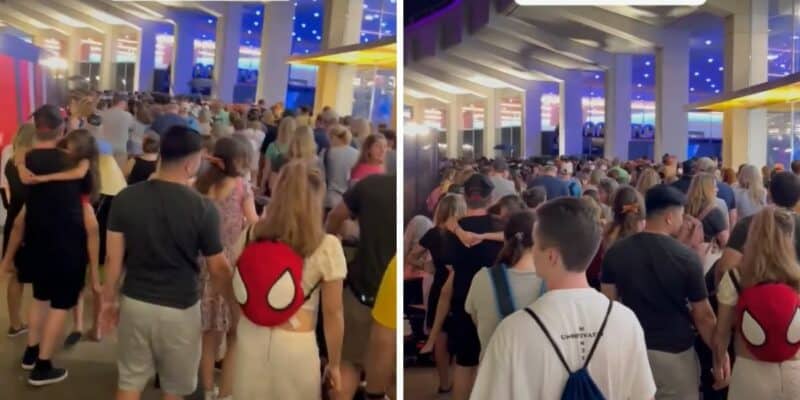 Although the Parks are crowded, the Parks are still operating under a reduced capacity. At the time of publication, we still have yet to hear an exact number when it comes to Park capacity, but that last confirmed number was 35%, which was released in early 2021.

It is clear that the capacity level is much more than 35% due to the current crowd levels at the theme parks, which some Guests are actually complaining about.

In the image above, you can see the sea of Guests attempting to exit EPCOT last night, March 23. Although the crowds look as though they are at pre-pandemic levels, we have recently confirmed Disney is still not operating at full capacity — and may never do so again.

Although McCarthy stated they do “not want to have the Parks bursting at the seams”, the amount of Guests attempting to leave EPCOT seems like the complete opposite.

Streaming the Magic was at EPCOT last night in the sea of Guests. They took a video of the packed in crowds attempting to leave the theme park, which you can see below.

One of the main downfalls to full Park capacity never returning is that prior to the reduced capacity put in place, Guests rarely had to deal with an “at capacity” Park. Now, however, Disney Park Passes are booking up extremely quickly, meaning Parks are at capacity frequently.

Additionally, when it comes to wait times for rides, many were hoping that Disney World would bring back its FastPass+ option, which allowed Guests to choose a time frame for select rides to bypass the standby line. However, last year it was announced that FastPass+ would be retired and, instead, Lightning Lane would be implemented through Disney Genie.

Lightning Lane is basically paid FastPass+ system, which many are not happy with. In fact, some claim Lightning Lane actually doubled their wait time.

This is not the first time we have reported on the crowd levels recently. As many schools go on spring break, families are flocking to Florida to visit Walt Disney World on vacation. And because of the amount of Guests visiting, the lines for select rides are taking over the Parks, including Space Mountain at Magic Kingdom.

We also reported on the Disney Skyliner line extending throughout Disney’s Pop Century Resort and the bus lines in the morning at Disney’s Art of Animation wrapping around the parking lot.

How do you feel about the current crowd levels at Disney World? Let us know in the comments below.