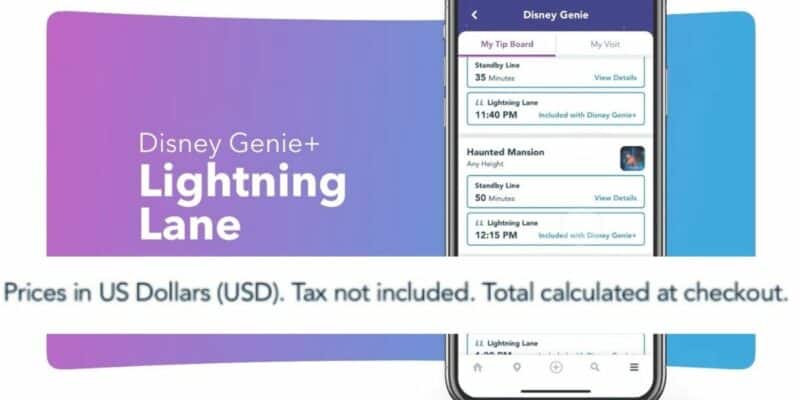 At the D23 Expo in 2019, Disney made several announcements surrounding what Guests can expect to see for the 50th anniversary in 2021 at Walt Disney World — including an all-new planning digital experience called Disney Genie.

That’s right — in case you were not aware, both FastPass+ at Walt Disney World and MaxPass at Disneyland are now officially retired, and instead, Lightning Lane is taking its place — a paid service. Lightning Lane is part of the new Disney Genie and Disney Genie+ service offered. Disney Genie+ is a paid system that charges Disney World Guests $15 per person per day to utilize the Lighting Lane, which is the old FastPass+ queue. Walt Disney World Guests are able to pick one return time at a time for select attractions and skip the lines when their turn arrives.

In addition to Lightning Lane, Disney Genie also has an option that allows Guests to purchase single experience passes for more “E-ticket” attractions such as Rise of the Resistance or Seven Dwarfs Mine Train at an added cost. These rides have their own cost, which will differ depending on the day and attraction. Please keep in mind that this option is not included in your Disney Genie+ purchase (if you decide to purchase that offering).

Though, what many did not realize is that the price tag on these offerings did not include tax, meaning it is not a flat fee and tax will be added at checkout.

TheUnofficialGuides shared the following to Twitter, noting that Lightning Lane is $9 plus tax:

I have a Virtual Queue for Ratatouille today, but the new #Disney Genie service will also allow me to purchase individual Lightning Lane for $9 plus tax, making it possible to ride Remy twice in one day. ^@skubersky #epcot #wdw #disneyworld

I have a Virtual Queue for Ratatouille today, but the new #Disney Genie service will also allow me to purchase individual Lightning Lane for $9 plus tax, making it possible to ride Remy twice in one day. ^@skubersky #epcot #wdw #disneyworld pic.twitter.com/7XngHDS4dS

In the last image of the Tweet, at the bottom of the screen reads “Prices in US Dollars (USD). Tax not included. Total calculated at checkout.”, meaning that Guests have to pay tax on the Disney Genie purchases.

Did you realize tax was not included in the purchases within Disney Genie? Let us know in the comments below.